Detroit's the worst place for veterans, but a local organization is helping them get on their feet

Veteran’s of the United States Armed Forces earned their stripes — literally — by putting their safety and well-being on the line in service of their country. These men and women embody discipline, respect, skill, teamwork, and patriotism and every year America celebrates Veteran’s Day in their honor.

But, despite their service, life after military retirement is not a perpetual hero’s welcome for most vets. Exacerbated by the physical and psychological scars of deployment — debilitating conditions that include life-long disabilities, post-traumatic stress disorder, and combat related stress — many vets succumb to hard times.

In 2016, the U.S. Department of Housing and Urban Department found 13,067 veterans in were homeless. After assessing 17 metrics — among them were employment, economy, quality of life, and health — a WalletHub study determined that out of 100 of the country’s most-populated cities, Detroit was the worst place for veterans.

Related Detroit is worst city for veterans, according to study

Detroit is worst city for veterans, according to study
By Lee DeVito
News Hits
Ahead of Veteran’s Day this year, Saturday, Nov. 11, a two-day conference on employment, quality of life, and health is being held at the Missionary Baptist Church. The event kicks off today and the Michigan Veterans Foundation is providing transportation to homeless veterans. 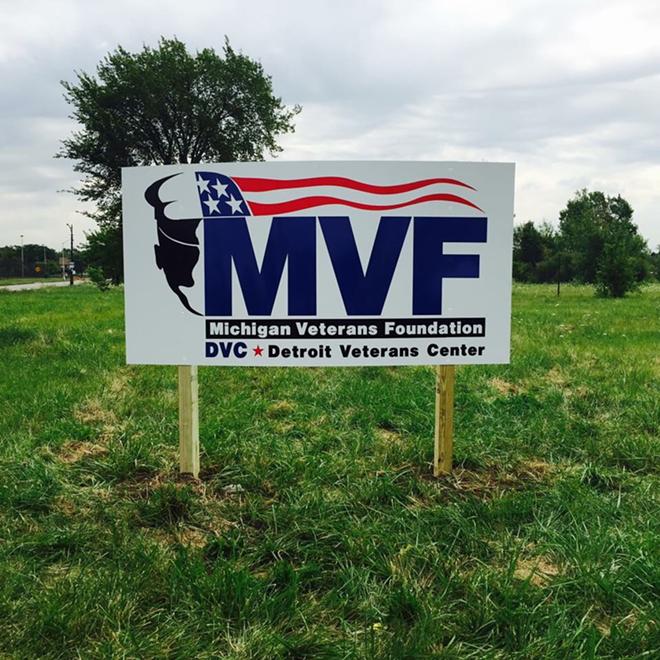 Tyrone Chatman is the executive director at MVF and he spoke with Metro Times about his organization’s continued dedication to supporting veterans struggling with homelessness, employment, alcoholism, health, and other factors.

Metro Times: What are the most common struggles for vets when they return home?
Tyrone Chatman: Combat is a situation where if you’re fortunate to survive it, you’re going to be affected. The question is, how does it affect you? What we tell the vets who have post-traumatic stress disorder and combat related stress is, “Don’t be embarrassed about it. Don’t let anybody make you feel bad. It’s a bad, horrible thing. You sacrificed your well-being for the greater good of this nation.”

It’s very difficult making the transition from being a soldier to a civilian, because in the military, you don’t buy anything. Your food is free, you don’t have to develop a budget, no dry-cleaning, no worries. Well, now that you’re out of the military, you’ve got to do those things for yourself. Got to get a job, got to get plugged in. Our job is to make certain that we lay out a roadmap for them, we act as their advocates and see to it that the services they are in need of, we identify those services, and we link the vets up with that.

MT: Tell us how the origins of Michigan Veterans Foundation and the work you do.
Chatman: We humbly began in 1989 at a YMCA in the city of Detroit, on the east side — Harper and Cadillac. We started out with 10 vets, and then word started getting out, because these are all Vietnam vets and, quite frankly, I’m a Vietnam vet and we were treated horribly when we got home. We all came together and decided we’d start taking care of each other. More and more vets started showing up, so we moved out of the Y and into a hotel. We leased out two floors, then three floors, and we realized, we got to do something about this, so we incorporated as a 501(c)(3). That was when housing and urban development identified what we called brick-and-mortar dollars, and we built our first facility from the ground up. That was located at 2770 Park Ave. We opened its doors in 1997.

MT: You recently moved into a new downtown facility, right?
Chatman: We moved in back in January 2017. We call it the Pentagon, because of its shape. It’s a 42,000-square-foot transitional housing facility for the men who have served this great nation.

As the new Little Caesars Arena was being constructed, we were right in their path. So, we sold [the Park Avenue space] and Mike Ilitch and the Ilitch family were very generous — Mike was a United States marine. They really laid some extra funding on us to see to it that we were going to be OK with the construction of our new building. So now, we’re occupying the new building and we couldn’t be happier.

MT: How many veterans does MVF house or provide services to?
Chatman: Right now our census is about 135 vets. They’re here for approximately 18 months. Then, if necessity dictates, I can extend it to 24 months so they can regain their stability and come back out into society as positive, productive, taxpaying, voting citizens.

MT: What kind of programming can veterans engage in while being housed in this facility?
Chatman: We deal with everything from post-traumatic stress disorder and combat-related stress to traumatic brain injuries. We’ve got vets confined to wheelchairs, canes, and walkers, and so our job is to provide them with services that will lead to stability and independence. We work very closely with the VA medical center in Detroit. They do a lot of our clinical interventions. Here, we have case managers, social workers, nurses, and acupuncturists. We do anger management classes, substance abuse prevention, and self-advocacy courses, along with claims filing, tracking follow-ups, and free legal work. We also have a huge Alcoholics Anonymous group called Sober Soldiers. I think that’s about 300-strong now.

Then we have the Vet Rescue Program for chronically homeless vets who you see typically panhandling on the street corners. Due to inclement weather, or some other risk factors, when can’t continue to do that they come here, to seek respite from the harshness of the environment, the streets or whatever.

We’re also a veterans referral and service center. If you served in the military, you can come here and we’ll tell you what benefits you’re entitled to. If you were injured in the military, we can file a service connected claim and get you a pension based on that. We also own houses in the city of Detroit. So we started phase one of our All-Vets Village in the city of Detroit about seven years ago, five houses that we rehabbed with the help of Habitat for Humanity Detroit and Bank of America. And then we have another six houses scattered throughout the city of Detroit.

MT: We recently published an article about a study that found, out of 100 other cities, Detroit is the worst when it comes to providing for its veterans. Do you agree or disagree with that?
Chatman: I don’t ordinarily slam [Veterans Affairs] systems, but certainly there’s a lot more that they could do to improve on their service delivery system. I do hear a lot from other veterans, and I do know that Detroit has been indicated as being on the lower-scale of quality if you will.

We are part of meetings where we talk about deficiencies and areas of improvement, and they’re very receptive to it. But, we are proactive. If we think that there’s something they need to improve on or something they need to be called out on, we don’t hesitate to do it. If a system is broken, as long as they’re receptive and they’re paying attention and listening, as long as they’re willing to acknowledge that, then there’s hope that it can be repaired.

MT: How can people get involved with MVF if they’re interested in volunteer work?
Chatman: We keep it simple. If one wants to support us either with their time, talent, or resources we tell them to give us a call and we’ll pick a date and time when we’d like to invite folks to come down for tours and find out a little bit more about who we are before they involve themselves. And then, as I say, you’re only limited by your ability to be creative. We can use all the boots on the ground that we can get.

MT: What’s the last thing you’d like people to know?
Chatman: We want people to know that freedom isn’t free, and someday you might be called upon to help protect and preserve what we all are enjoying in this great nation.

Find out more about the Michigan Veterans Foundations at michigaveteransfoundation.org or by calling 313-831-5500.

Aleanna Siacon is an editorial intern for the Metro Times. She is a senior at Wayne State University studying journalism, political science and history.