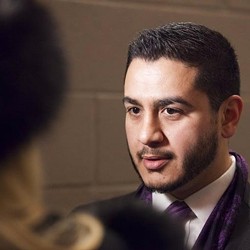 The jury’s still out on whether or not Abdul El-Sayed, gubernatorial hopeful and former executive director of the Detroit Health Department, will sink or swim in the partisan primary on Aug. 7.

But the candidate has recently released a water policy plan that is the most comprehensive call for change released on either side of the aisle to date.

In Michigan, water can be surprisingly hard to come by in a state surrounded by 84 percent of North America’s surface fresh water supply. Yet Michigan captured national attention when families in Flint were exposed to poisonous amounts of lead. Each year, Detroit shuts off water in thousands of homes with delinquent bills. And a water main break put Oakland County under a mandatory boil water advisory for seven days in October, all while pollution and invasive species threaten the Great Lakes.

“This is an issue, where if you wanted to look at how the state has failed in providing very basic sets of investments, this is clearly one of them,” El-Sayed says. “We can’t seem to protect access to [water] for people who need it, or protect it and make sure that it’s safe and healthy to begin with.”

His plan calls for a public health study to better understand the effects of shutoffs on overall health, as well as the racial disparities at play.

“There’s no doubt that in the places where we’ve had the biggest issues with water that people are disproportionately poor and disproportionately likely to be people of color, and there’s no doubt that they’re linked,” he says. “We have to address that, and I think that this policy helps us to create a standard by which we are making sure that access to clean, drinkable water is accessible to everybody, and that we are addressing some of the structural barriers by sidestepping them.”

A key facet of his plan is to support pending congressional bills that would restrict water shutoffs, require access to clean water, and create a legal pathway for mandating affordable pricing statewide.

El-Sayed says he envisions a tiered-pricing system that ensures a living standard of water, but increases based on consumption. In other words, the households that use more are the ones that pay more.

“Our whole plan is to basically provide access to the basic amount that people need to drink, to cook, to clean, and to bathe free of charge for a family of four in any residentially zoned area in the state," he says. “And then what we would do is institute block pricing so that each additional amount of water would increase the price per unit water, because we know we need to conserve over the long-term.”

“There’s no doubt that rebuilding our infrastructure is going to create jobs, but we want to do it in the right way,” he says. “We want to make sure that we’re solving the problem of water access and water affordability, and at the same time, creating jobs in the process. Rather than turning this into some sort of talking point.”

Additionally, El-Sayed’s plan aims to promote the health of the Great Lakes with regulations that target excess phosphorus from runoff pollution resulting in toxic algae, measures to curb the infiltration of Asian carp, updates to limiting and regulating fracking, a push to decommission Enbridge’s Line 5 oil pipeline running through the Straits of Mackinac and renewing funding for the Clean Michigan Initiative.

Related The Great Lakes are being poisoned by poop

The Great Lakes are being poisoned by poop
By Jack Lessenberry
Politics & Prejudices
El-Sayed’s biggest opponent on the Democratic ticket — former Minority Leader of the Michigan Senate, Gretchen Whitmer — has also touted environmental issues, the protection of the Great Lakes, water management jobs, and outrage over the state’s handling of the Flint Water Crisis.

Meanwhile, Republican leader and Michigan Attorney General Bill Schuette, who has been at the head of handing out indictments for the Flint Water Crisis, promises to create jobs, cut taxes, and has received an endorsement from President Donald Trump, who has called for massive cuts to the EPA.

However, El-Sayed’s proposed water policy is the only plan delivered and made publicly available by a gubernatorial candidate that explicitly predicates transparent and specific courses of action by naming particular congressional bills currently pending, funding mechanisms on the table for repairing infrastructure and increasing accessibility, addressing the need for more public health data, plus racial and socioeconomic disparities.

“This policy represents our best efforts to think through the set of challenges that we face comprehensively about water across the state, and posed thoughtful, reasonable, common sense solutions to addressing that failure that we have right now,” he says. “There is not another problem that so well captures the dysfunction that we’ve seen in our state under the current leadership — and we’re going to solve it.”

Aleanna Siacon is an editorial intern at the Metro Times. She is a senior at Wayne State University studying journalism, political science and history.