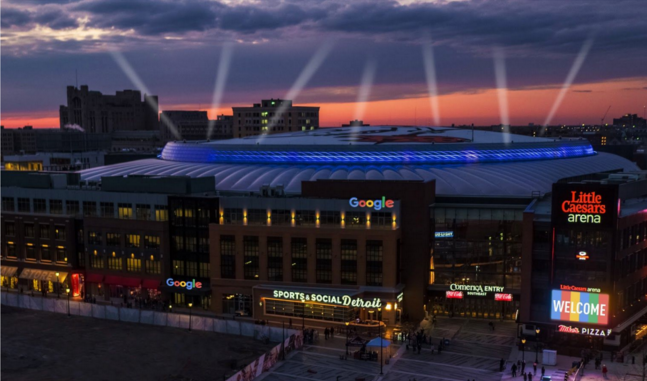 Google has settled on a Detroit home – right in the shadow of the pizzarena.

"The city of Detroit has a rich history of culture and innovation, and
we’re excited to be a part of its world class talent and world class companies." Danielle Russell and Guy Schueller of Google Birmingham said in a statement. "Our new space will not only provide room for future growth, but will also give us the opportunity to contribute to the dynamic economic
and community activity happening in Detroit.”


Crain's reports the building on Henry is four floors with 17,000 square feet of ground-level restaurant and retail space and 47,000 square feet of office space above.
Google will be the first big, Ilitch family-unaffiliated business tenant for Olympia, which has said it's in the process of building a 50-block residential and business district in the area surrounding the arena.

“This exciting move by Google is another clear sign that, in The District Detroit, we’re building one of the best and most exciting places to live, work and play in the entire region," Ilitch Holdings CEO Chris Ilitch said in a statement.

Olympia's vision for District Detroit involves renovating old buildings into mixed-use developments and constructing some new buildings as well. People in the area, however, have doubted whether the district will ever actually materialize, pointing out that Olympia has so far been focused on demolishing buildings and paving parking lots throughout the area. It's been nearly 180 days since the Ilitches announced its big residential development plans — which include the renovation of historic buildings like the Hotel Eddystone and United Artist Theater — and no work has begun.