As calls for Congressman John Conyers' resignation grow louder following newly released details of his alleged sexual transgressions, the media is levying its own assault on the 88-year-old — one that has landed him the hospital.

"The congressman's health is not what it should be and a lot of that is directly attributable to this media assault," Riddle tells WDIV-TV.

If you haven't been following the barrage of headlines surrounding Conyers' alleged sexual harassment of at least two former staffers, here's the latest: The 88-year-old is now in the hospital.

Other news of the day: One of Conyers' accusers went on NBC's Today to say that the Congressman violated her body. Shortly after, House Minority Leader Nancy Pelosi called for his resignation.

Conyers has so far denied the harassment allegations but has admitted to settling a complaint for $27,000. Sunday, he stepped down from his post as ranking member of the House Judiciary Committee. Tuesday night, he returned to Detroit from Washington "to look after his family," as per a Free Press report.

The media has been staking out his house on Seven Mile, near the Detroit Golf Club, ever since. 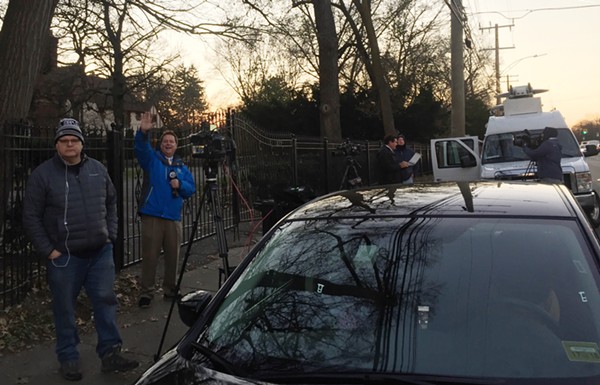 According to Conyers' wife, the infamous Monica Conyers, camera crews were outside the house well after midnight Tuesday, and they were present as she got ready for work the next day. When Metro Times drove by Wednesday afternoon, the circus was in full effect, with made-up TV men prepping for their 5 p.m. live hits. Several passersby stood in the busy roadway to watch what was happening.

Monica Conyers turns 50 today
If you were to pick a Most Valuable Player when it comes to keeping all eyes on City Council for the wrong reasons, you'd have to select Monica Conyers, who, fittingly, celebrates her 50th birthday today.
By Michael Jackman
News Hits 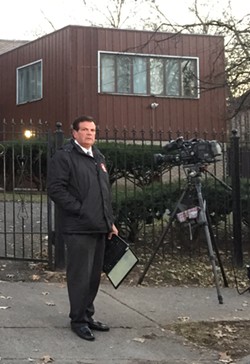 Monica Conyers had scolded the media for "stalking" her house as she was on her way out earlier that day. The TV stations and Free Press then broadcast and posted her comments.

Here's a transcript of her relatively pragmatic (for Monica), 1:30 min monologue. She does, however, at one point vaguely threaten reporters.

Reporter: "We're just trying to get reaction, your husband is a public figure."

Conyers: "But I'm not, and my children are not, so is that fair to us? If you want to — find out where he is, go to his office, that's where he's a public figure. When he's here, we're a family, we're a home, so I think this is inappropriate and disrespectful for you to sit here first thing in the morning and late after the midnight hour to see if someone's gonna come and go. So, I mean, if you're going to continue to do that, maybe we should do like the previous administration and come and find out where all you live at and stand outside your houses and do that too.

So I respectfully ask you, that you not post all at my house when people come down the street, cause I saw you doing that this morning first thing when I got up and got ready for work, and I think that's inappropriate.

So that's all I have to say and you guys have a good holiday."