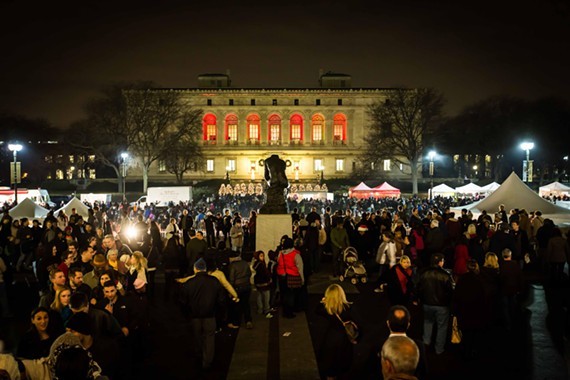 Noel Night festivities in Midtown Detroit were punctuated by gunfire Saturday as police say four teenagers were shot outside the Detroit Institute of Arts.

Detroit Police Sergeant Nicole Kirkwood says a 14-year-old boy, a 15-year-old boy, and a 17-year-old girl were wounded and transported to the hospital with non-life-threatening injuries. A fourth victim, a 19-year-old man, took himself to the hospital. The shooting happened around 7:40 p.m. near Farnsworth Street and John R Street.

Police had not found the suspect in the shooting as of 10:20 p.m., but described him as a light-skinned black man who had been wearing tan pants.

Visitors of the annual music, art, and culture event took to social media to describe chaos around the DIA and an early end to festivities as some places were evacuated. Wayne State University tweeted that the event had been shut down prematurely because of the shooting.

One woman who was outside the DIA after the shooting occurred said she saw officers run by her and into the building:

I'm safe, everyone I'm with is safe, but shaken. Panicky people and crazy traffic. Got out of the area and are relaxing with pets and whiskey. pic.twitter.com/aLpR6znvfp

Police evacuating the crowd after two people were shot at #NoelNight in Detroit pic.twitter.com/4EedfxQnJ3

Noel Night draws thousands of people to Midtown on a Saturday in early December each year as places like the Detroit Institute of Arts, Michigan Science Center, Charles H. Wright Museum, and Detroit Historical Museum open their doors to the public, free of charge.