Freep: Let's give Michigan's rich more of our money! 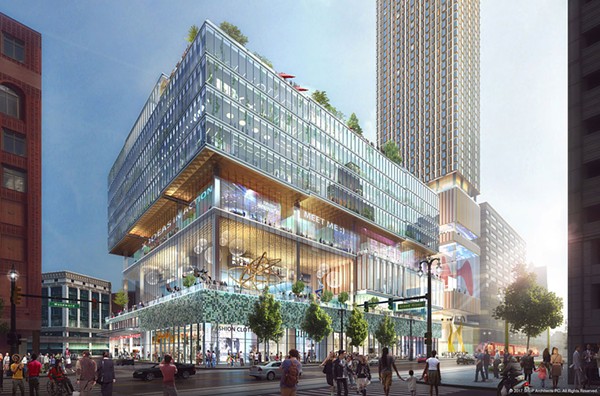 Earlier this year, the Michigan Legislature approved $1 billion in state tax money for Dan Gilbert and other wealthy developers. The arrangement allows the rich and corporations to collect state residents' income tax instead of the government. On Nov. 21, the Detroit City Council approved $250 million in local tax money for Gilbert to use on four downtown projects he's planning. On Dec. 1, the U.S. Senate approved a 15 percent cut in the corporate tax rate and a long list of other changes to the tax code that will largely benefit the rich. On Dec. 4, we reported that Gilbert is now seeking a total of $618 million for his downtown projects. The request includes money that should go to Detroit Public Schools. And yet, on Saturday, Detroit Free Press staff business writer and columnist John Gallagher penned a piece in which he essentially asks: Is this enough? Can't we give the state's wealthy more of our money? Surely there's more in the state's couch cushions for developers. While we may scoff at the idea that the rich need more, we've asked the same type of questions as Gallagher. But we called it satire. When Mike Ilitch died on Feb. 10, our news writer Michael Jackman quipped on social media: "As Mike Ilitch heads to his skybox, I am left wondering: Did we give him enough money? Couldn't we have given him more?" And when the city of Detroit hesitated in 2015 to hand over a massive amount of east side land to John Hantz, a Detroit businessman who is worth over $1oo million, Jackman questioned our treatment of the rich in his article "Times are tough for Detroit's super wealthy, but you can help." "The well-to-do have been too long ignored in this town, and it’s high time we all stepped forward to ensure they get what they need," Jackman wrote. "Examine your soul, Detroit: Have you done enough to help those with the thankless job of being incredibly wealthy? If not, aren’t you ashamed of yourself?" In his Saturday piece, Gallagher — who describes himself as "liberal-minded" — asked: "If we give incentives to billionaires for the biggest projects, what do we owe for ordinary Detroiters?" His suggestion — no kidding — is more tax breaks for wealthy developers. He calls for the restoration of the state's Historic Preservation Tax Credit that Gov. Rick Snyder eliminated several years ago, which provided a 20-percent tax credit for those rehabbing historic buildings. The idea that "ordinary Detroiters" would benefit if the state began paying for 20 percent of developers' restoration projects is beyond absurd. While some public assistance in rehabbing the state's urban cores is reasonable, the level of corporate welfare we see in Michigan is obscene, and more tax credits for the rich aren't the answer. Of course, this is the Free Press, so we shouldn't be too surprised. After all, it  has a mixed record when it comes to reporting on corporate welfare. (It's worth noting that the paper operates out of a building owned by Gilbert.) When Gilbert announced his projects would create 24,000 jobs — a questionable claim for reasons we discuss here — the Free Press didn't ask "How?" Instead it put together a borderline PR video touting the projects. When the Detroit City Council voted on Nov. 21 to divert $250 million of city tax money to Gilbert's pocket — which sparked a lively debate during public comment at the meeting — the Free Press didn't even bother to run a story. Instead, Gallagher put together a piece a week later asking residents to submit suggestions for a name for Gilbert's new building on the former Hudson's site. All this in our supposedly liberal daily. Yet here's Gallagher, pushing the deeply conservative idea of trickle-down economics. (And keep in mind that the Free Press is being sued by four of its female employees for allegedly paying women less than male co-workers in the same position.)

To be fair, the Free Press' editorial board has written in the past about its concerns with incentives, but we're still wondering when Gallagher just takes a PR job at Bedrock.