Nearly all of Detroit's 1,900 miles of residential streets have been plowed, officials say 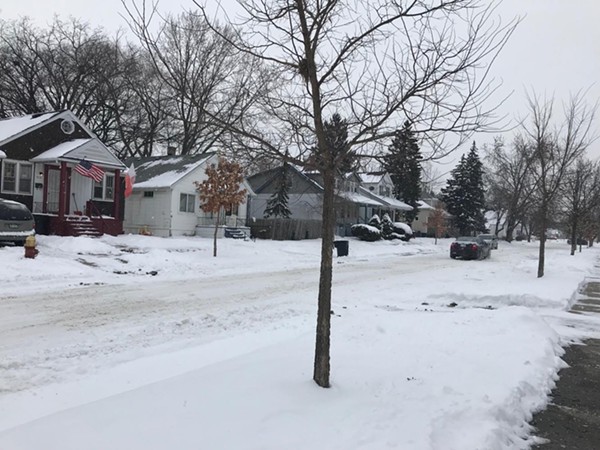 Hallelujah! If you live in Detroit and have been snowed in following the Wednesday winter storm that produced more than six inches — there's a 90 percent chance you're free!

The city says it deployed snow plow contractors at 4 a.m. Thursday, and a little more than 24 hours later, crews reported they had cleared nearly all 1,884 miles of Detroit's residential streets. About 10 percent of residents are still looking out on thickly snow-covered roads after a contractor working to clear District 3, the northeast side, suffered some vehicle breakdowns. The city reports that its General Services Department has stepped in to pick up the slack in that area.

If you haven't seen your street plowed, the city asks that you use the Improve Detroit app to take a photo and let them know where contractors may have missed a spot. You can also email us a pic and we'll pass the message along. (For reference, the photo above is an image of a PLOWED street.)

If you're wondering why your street only sometimes gets cleared during snow spells — that's because things have to get pretty bad before officials cough up the cash to make it happen. Check out the city's plow criteria below.

Level 1 winter weather: 3 inches or less of snow and/or freezing rain
- DPW crews will salt only on major thoroughfares.

Level 2 winter weather: 3 to 6 inches of snow and/or freezing rain
- DPW crews will plow and/or salt on major thoroughfares only.

Level 3 winter weather: 6 inches or more of snow and/or freezing rain
- DPW crews will plow and salt on major thoroughfares.
- The city will have 50-plus trucks on the streets until all the major thoroughfares under its jurisdiction are safely passable.
- The city may utilize contractors to plow all residential streets depending on the characteristics of the snow accumulation, prevailing temperatures, and forecasts. If required, residential snowplow contractors will plow a 10-foot pass down the center of the street only and will not clear driveways. Contractors are required to complete their work within 24 hours after snow stops accumulating.