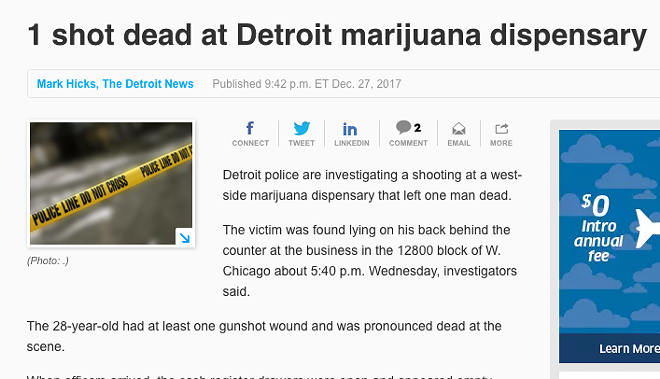 What's the big deal with the headline: "1 shot dead at Detroit marijuana dispensary"?

On its face, not so much. It certainly got our attention, because we've heard from dispensary operators that accounts of crimes at dispensaries are wildly overstated, and here would appear to be some evidence to the contrary.

We braced ourselves, considering for a moment that perhaps we'd been had by all the advocates of medicinal cannabis dispensaries who claimed to be the victims of unfair and untrue publicity. We were about to get a taste of how "the other side" feels. Those telling tall tales about dispensaries being crime magnets were about to be vindicated. Maybe it would be an account of a customer being shot walking out with his medicine. Perhaps it would be the tale of a daring rip-off raid on the business' nightly deposit.

What we found in the actual Detroit News story, however, was something different. The person who was shot was behind the counter. The register was empty of bills. The authorities were "working to determine whether the shooting stemmed from a robbery."

Now, I'm no expert on police protocol here, but if a guy is shot to death behind the counter and the register is emptied, it seems safe to say the crime was an apparent robbery. The Detroit Free Press, at least, said as much in the first paragraph of the story.

One reader smelled something foul right away, commenting about the apparent disconnect between the headline and the story:

This is not to condemn the copy desk and headline editors of The Detroit News. While we've pointed out some shortcomings in how the News packages its reporting before, we concede it's quite possible somebody honestly felt all they had to go on was the police statement. Just to be on the safe side, why not say that somebody was shot dead at a marijuana dispensary?

Of course, if you wanted to really err on the side of safety, you might say that a person was shot to death at a west side business.

Why quibble over a headline? (Why, yes, it is a slow news day. But, more to the point ...) Because there are political figures in Detroit who've made their career on the association of medical marijuana and crime. They've exploited the issue to rile up their constituencies — mostly little old ladies who know little about medicinal cannabis and get most of what they know about "drugs" from watching Kojak.

When we see a headline that conflates medical marijuana and crime, only to actually show that an apparent medical marijuana employee appeared to be the actual victim ... it is puzzling. Especially when the actual research shows that well-regulated dispensaries are responsible neighbors and valued members of the community that bring jobs and increased economic activity.