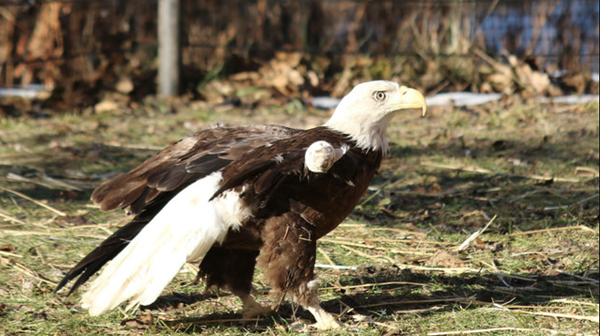 Mr. America, named by the licensed rehabber who initiated his care, arrived from southern Indiana after an injury that severely damaged one of the bird’s wings. It is presumed that the injury was a result of having flown into a power line, which rendered the wing useless. The wing was amputated shortly after.

In a press release, the Detroit Zoological Society states the one-winged eagle "landed" at his new home at the Detroit Zoo in mid-November. After several weeks in quarantine receiving specialized care, he's taken up permanent residence at the zoo alongside Flash, another rescued male bald eagle with a wing injury.

Though little is known of his backstory, likes and dislikes, or even his family background, it's clear Mr. America is a bit small for his kind. Estimated to be between 5 and 6 years old, he weighs in at 6 pounds — most mature eagles weigh between 10 and 15 pounds.

“We’re happy to offer sanctuary to another rescued, non-releasable eagle and provide him expert care and a great place to live,” Scott Carter, chief life sciences officer for the DZS, says.