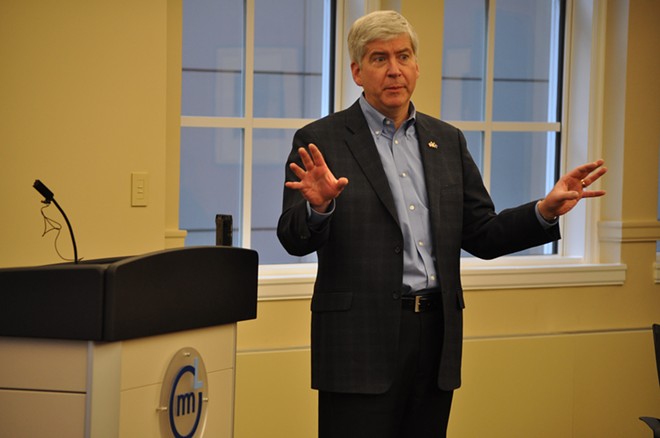 Following concerns that President Donald Trump's tax overhaul will raise taxes for Michigan residents, Gov. Rick Snyder announced on Monday that his office is at work on a legislative fix.

“We are putting Michigan families first, by working to enact a simple and fair solution to fix the unintended consequences of the federal tax plan,” Gov. Snyder said in a statement. “Everyone working together to limit income taxes on Michiganders is a great way to start 2018.”

Since the federal tax reform eliminated personal exemptions at the state level, language would have to be added to the state tax code to allow for exemptions. Previously Snyder estimated Michigan taxes could raise by $170 a person, or $680 for a married couple with two children. According to Snyder's press release, without legislative action Michigan taxpayers would pay $840 million more in taxes in 2018 and more than $1.6 billion in 2019.

The GOP-led Congress hastily voted to get the tax overhaul bill on Trump's desk in December. Several errors were found in the 11th hour. No House Democrats supported the bill, and 12 Republicans voted against it. All of Michigan's representatives voted for the bill.

The overhaul is forecast to raise the federal deficit by hundreds of billions of dollars.

The press release says Snyder and the state's Department of Treasury analyzed the tax reform and will share findings on how it will affect Michigan taxpayers sometime this week.