Astronomer says yes, that was probably a meteorite that lit up the Midwest sky

by Alysa Zavala-Offman and Violet Ikonomova

Yes, the loud boom heard and flash of light seen around southeast Michigan shortly after 8 p.m. were probably the result of a meteor.

Mike Narlock, head of astronomy at Cranbrook Institute of Science, says it was likely a bolide, a special type of fireball that explodes with a bright terminal flash at its end, often with visible fragmentation. 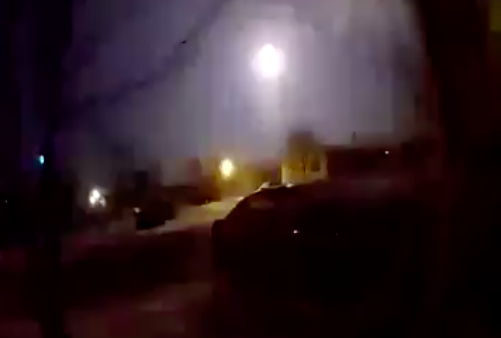 Narlock tells Metro Times the meteor likely exploded very high in the sky, which is why people as far away as Illinois are reporting hearing and seeing it.

"I have heard people saw it as far Chicago, which if that's true that tells me it happened pretty high up in the atmosphere if they're seeing it from that distance," Narlock says. "Certainly for us to see it, for it to be as bright as it was, it has to happen closer to the ground than to the very upper atmosphere. But I would feel comfortable saying it happened higher than 10 kilometers, at least six to 10 miles up, I’m guessing."
The noise reported along with the loud boom is also indicative of a bolide, Narlock says.

"If people heard a noise, it's common for bolides as they’re streaking across the sky to make a whistling sound" he says. "I had a colleague who thought he heard crackling associated with the light."


Of course, Narlock says there is also a chance he's wrong.

"It could turn out to be just winter lightning," he says.

Michigan State Police also seem convinced the incident was a meteor, and confirmed that the light and boom were at least not the result of any airplane activity.

"[Detroit] Metro Airport is not reporting any aircraft missing or anything like that," MSP Lieutenant Michael Shaw says.