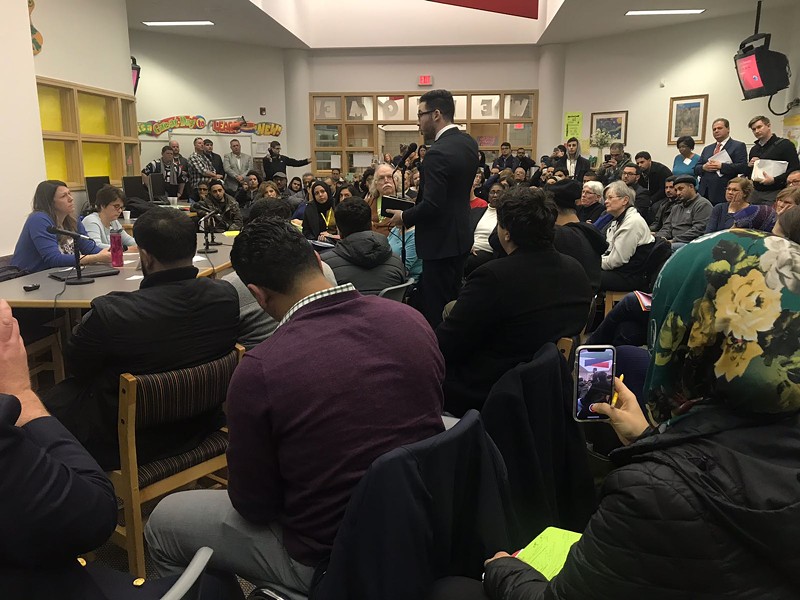 On Jan. 16, the Michigan Department of Environmental Quality held an informational meeting at Salina Elementary School in Dearborn regarding a power plant's request to increase the amount of toxic waste they pump into the air.

Dearborn Industrial Generation (DIG), a natural gas fueled plant, wants to pump an additional 900 tons of carbon monoxide and over 40 tons of sulfur dioxide into the air and is requesting permits from MDEQ to do so.

Redwan Ali, a Dearborn resident, attended the Tuesday evening meeting to express his concerns about increasing emissions in an area that's already suffering from air pollution.

“Only in the south end [is] the sky never blue. You only see gray and that is because of the pollution that we have,” Redwan Ali told MDEQ's Air Quality Division director, Lynn Fiedler, during the meeting, which took place at a school that's a mere 1000 feet from the DIG plant.

During the informational session and the public forum that followed, locals were packed into the school's media center, spilling out into the hallway.

A panel of MDEQ staff members answered the crowd's question, and Fiedler — who will decide whether or not to issue the permits — stayed to hear residents' concerns.


DIG's two permit proposals are asking for an additional peaking turbine and a change in formaldehyde, and other pollutants emissions. DIG has looked at similar turbines and evaluated against health-based standards and that state and federal regulations have been met.

Ali, who is asthmatic, is worried about the adverse affects the increased emissions will have on his children's health.

State Rep. asks Dearborn residents to rally against requests to increase air pollution
By Malak Silmi
News Hits
Jonathon Martinez works with families who are affected by asthma caused or exacerbated by poor air quality in the city. He spoke in opposition of the new turbine and increased emissions saying, "Clean air shouldn't be a privilege, it should be a right."

“We believe that the proposed increase of air pollution from this facility represents a serious environmental justice issue and a serious threat to the health of the children of south Dearborn," Leonard said. "We believe it is absolutely necessary for the MDEQ to deny both proposed permits in order to protect an already vulnerable community.”

Rhonda Anderson, Senior Organizing Representative at the Sierra Club-Michigan, has attended about 85 hearings over the course of 17 years, and claims MDEQ has only ever denied one permit. She said it makes them feel fruitless.


“Because of systemic institutional racism, these things are allowed to continue, and the lives and the health of the people in these communities are ignored,” Anderson told the crowd.

State Representative Abdullah Hammoud, who urged Dearborn residents to attend the meeting, was willing to make concessions in order to convince MDEQ to deny the permits.


"Sixty percent [of the south Dearborn neighborhood] have limited to no English proficiency and yet not a single communicative method was enacted on [by MDEQ and DIG] to reach out to these residents,” Hammoud continued, “The residents are here because organizers caught on to the permits that have been submitted and they brought the residents here to listen and make their voices heard.”

Fielder will make a decision about the permits within the next 30 days.

Malak Silmi is an editorial intern for Metro Times and a journalism major at Wayne State University.