Duggan, Fouts, and other Michigan mayors summoned to meet with Trump 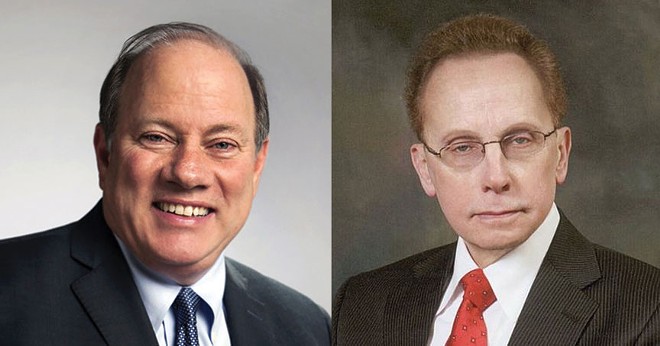 What do Detroit Mayor Mike Duggan, who helms a majority-black city that gave Trump a resounding "fuck no" in 2016, and Warren Mayor Jim Fouts, an alleged racist who runs a city where 43 percent of voters supported Trump, have in common? They're both reportedly paying a visit today to President Donald Trump!

According to the Detroit Free Press, the two are among a group of mayors from across the country scheduled to meet with the president at the White House this afternoon. A White House press briefing describes the event as a "working session" in which Trump will discuss the "growing economy, as well as working together to tackle the opioid epidemic and rebuild the nation’s aging infrastructure."

Duggan and Rochester Hills Mayor Bryan Barnett were the only Michigan mayors on a participant list supplied by the White House. Flint Mayor Karen Weaver's office confirms she is also in attendance.

10 things Warren mayor Jim Fouts looks like
By Jack Roskopp
The Scene
An email to Fouts' assistant was not immediately returned.

The event was to take place at 3 p.m. in the White House East Room.