Grosse Pointe will fight rat problem around its DPW site... by moving it to Detroit 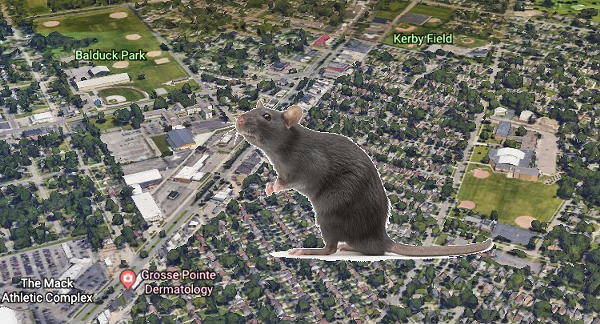 We had two different people forward us this story from Grosse Pointe, and when we were done reading it you could have knocked us over with a feather. The article is that weird.

It's just that everybody in the story seems utterly dead to the irony of putting a wealthy community's trash operations in the poorest big city in the country.

OK, it's a little more than that: In dollar figures, it is a city with a $92,500 median household income that has chosen to headquarter its garbage collection in a city where the median household income is $26,095. Demographically, it's a city that's 93 percent white handling its trash and parking its trash trucks in a city that's 82 percent black. And then there's the symbolism of the choice of putting the Department of Public Works site, with its allegedly rat-attracting trucks, a stone's throw from Balduck Park, one of the key recreational areas on Detroit's east side.

Why? Because they can. It's the more affordable option, as the story points out.

Then there's NIMBY-ism — an acknowledgement that, while the city will have to handle the community's trash, the best place for it is Not In My Back Yard.

The story told how residents claimed the DPW site attracted rats and carried signs with angry rat faces. One Grosse Pointe woman declared that she had a serious rat problem, and once had a rat die in her home. Getting rid of the dead-rat stench "took months," she said. The same woman also complained that the DPW site often meant city employees parked in front of her house!

So when the council vote appeared to push to DPW site over to the hard-done-by neighborhood across Mack Avenue, many in attendance began to applaud. The reporter quoted one residents as being "very pleased" and saying the council's decision reflected a determination to preserve "the community and our quality of life here.” The story also quoted Grosse Pointe City Councilmember Sheila Tomkowiak as saying, “I’m really excited about the outcome. ... I think it’s good for everybody.”

That was a statement the story's commenters on the Detroit side of Mack Avenue took issue with almost immediately.

This may not be the last we've heard about this issue. Residents of the Cornerstone, Morningside, and East English Village neighborhoods are getting fired up about this issue. The city of Grosse Pointe may have just done more to promote the issue of environmental justice than they realize.