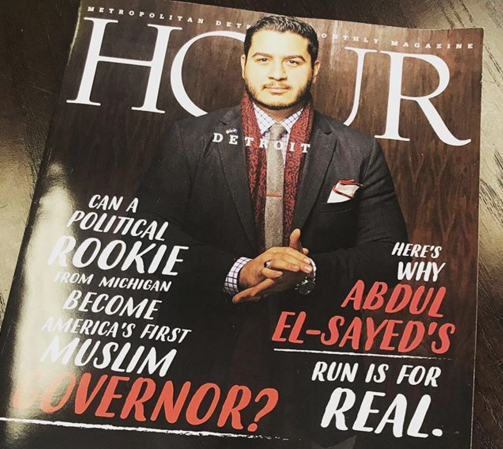 Much has been made of Democrat Abdul El-Sayed’s bid to become Michigan governor. International and national media outlets have been drawn to him for his religious beliefs (if elected, El-Sayed would be the first Muslim governor in the U.S.), and his un-American name, charisma, and skin tone, appear to have prompted some to compare him to Barack Obama (though El-Sayed, who supports single-payer health care and free college tuition for people from low and middle income backgrounds, has said he’d prefer to be compared with Bernie Sanders).

While stories on the former Detroit health director’s candidacy have been less robust on the local level, there was at least one big profile on the gubernatorial hopeful published in Hour magazine. El-Sayed landed on the January cover of the glossy, with an accompanying story whose headline — "Why Abdul El-Sayed's Run for Governor Is for Real" — could prove to be ironic.

That’s because El-Sayed, who has not filed his candidate paperwork, may not even be eligible to run.

According to a report by Bridge magazine, a recent stint in which El-Sayed lived in and was registered to vote in New York may violate the state constitution’s candidate requirements. Michigan law says that a gubernatorial candidate must be a “registered elector in this state” for four years before the general election. A Bridge review of elections records found El-Sayed was registered to vote in Manhattan as recently as March 2015.

While El-Sayed’s campaign tells the magazine he’s eligible because he’s owned an apartment in Ann Arbor since 2008, five in six election lawyers seem to disagree. Bridge reports that of the half-dozen lawyers it had review El-Sayed's voting records, all but one raised serious questions about whether he could make it on the ballot. One reportedly called the case against him a “slam dunk."

El-Sayed, who was formerly Detroit’s health director, lived in New York for a professorship at Columbia University.

A campaign spokesman called questions over his eligibility for candidacy “a political attack” that “falls in line with a long history of attacks on certain kinds of people when they aspire to leadership in our democracy.”

The spokesman likened the “attack” to the “birther” saga that surrounded former President Barack Obama. His campaign says it believes the eligibility questions were raised by others within the Democratic party.