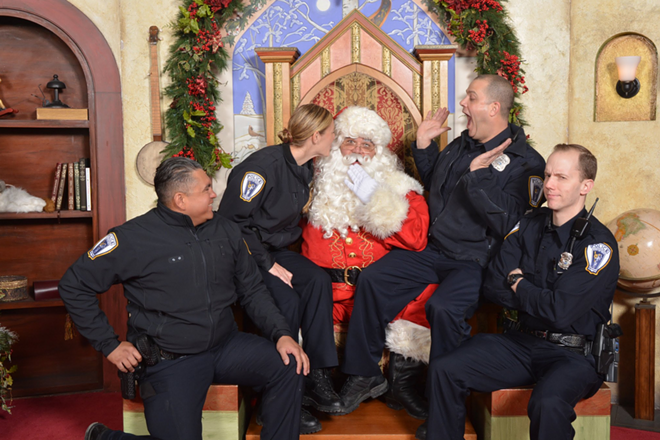 The city of Troy is known for a lot of things — McMansions, good schools, an upscale mall — but having a chill police force hasn't historically been one of them. Now, that's starting to change, thanks to the Troy PD's deft use of social media.

If you're not one of the more than 3,500 people following the Troy police account, here's a sampling of some of its humorous content:

"Do you have anything illegal on you?"
"Not that I know of."
I think we can all agree that this is something you should know.

Is that the missing member of the Allman Brothers band or an undercover cop? Ya just never know. #DontDoDrugs

Received a question about "urban deer hunting." Hunting of all kinds is illegal in Troy. This guy will be resting easy, living that suburb life. pic.twitter.com/2D3Kx16mM6


Behind the account is not a millennial, but a meme-savvy 40-year-old who believes a little bit of ingenuity online can go a long way in helping improve the relationship between citizens and police.

"Our whole goal is to let people know we're human," Sergeant Meghan Lehman, who heads up the department's community services division, says. "We were always known for our traffic enforcement, so that kind of says a lot, because people will get a traffic ticket and that negative experience leaves a long lasting impression, so this is kind of a good way to show our other side, which we don't often have the opportunity to do."

That "other side" includes the more mundane, community-oriented services that go along with policing one of Michigan's safest suburbs. It also apparently includes an affinity for stuffed animals and — no surprise here — donuts.

Some days you save a life, other days you look for a runaway cat.
It's called police work. It's what we do. ♥️👮‍♀️👮🐱

Look out officer Julian. Our Troy Colt mascot is going to speed away. 🚓🐎 pic.twitter.com/o7vxZXB6tg

Spotted in a Troy PD patrol car... 👮💙🦄 Everything is better with unicorns. Have a safe drive home! pic.twitter.com/5HHfnjJNA9

The department also makes statements that suggest it stands in solidarity with the #MeToo movement. When asked if she feels such posts are a little political, Lehman says flatly, "Sexual assault is not a political thing, it's illegal and it's wrong, and us saying it’s bad is not political."

"My daughter died in a car crash."
"That's what she gets for not taking the bus."
= As dumb as blaming rape victims. #EndSexualViolence pic.twitter.com/I7d92peydS


Lehman, who has been with Troy police since 2004, says the department "started pushing it a little bit" on social media last year. The change in tone came amid renewed focus on community policing following high-profile police killings of unarmed black men across the country.

"This is the way community engagement is going now," Lehman says. "People will sometimes say 'shouldn’t you be out arresting people?' But we need to also humanize ourselves and get prevention and education messages out there, it makes our job easier, it makes the community safer, it makes people happier to live in Troy."