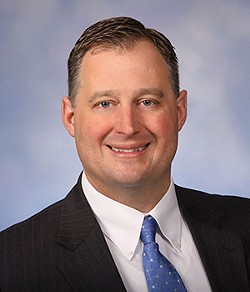 In an unexpected vote, this week the Republican-led Michigan House passed a bill to make English the official state language. The bill is expected to pass the Republican-led state Senate, though it's unclear whether Gov. Rick Snyder will sign it.

If approved, the English language distinction would change very little. State documents would have to be printed in English, which is already standard procedure. English would have to be spoken at public meetings, in another continuation of the status quo.

So we couldn't have been alone in wondering, "What's the point?" In an effort to learn more, we reached out to the four Democrats who joined the majority of the state's Republican representatives in approving the bill.

Three of those Dems were from right here in metro Detroit. Democratic Reps. LaTanya Garrett of Detroit, John Chirkun of Roseville, and Robert Kosowski of Westland did not respond to calls for comment Friday. But the Upper Penninsula rep who voted to make English the official state language did.

Here he is, in his own words:

And I want to tell you another thing. We, as citizens of the country, we gotta figure out internationally what’s happening with the economics of our country. Everything is made in China. Maybe instead of speaking all these other languages maybe we should just learn Chinese because the bulk of the stuff we're picking up in our stores is made in China, so I think people gotta start thinking about this stuff a little more than other things.

Metro Times: I think you'd be impressed by how fast I type, I managed to get all that.

Rep. Dianda: I don't type at all, so you’re doing better than I am.

MT: Oh, wow. OK, so was this just a symbolic gesture? Public records are already provided in English, English is already spoken at meetings — so what was the point?

Dianda: I think they’re printing all kinds of things in different languages, though. There’s a lot of stuff that’s printed throughout the state with multiple languages. I guess they just want to make sure that it's gonna be English first. They want English first. That’s what it comes down to: They want it on the first line.