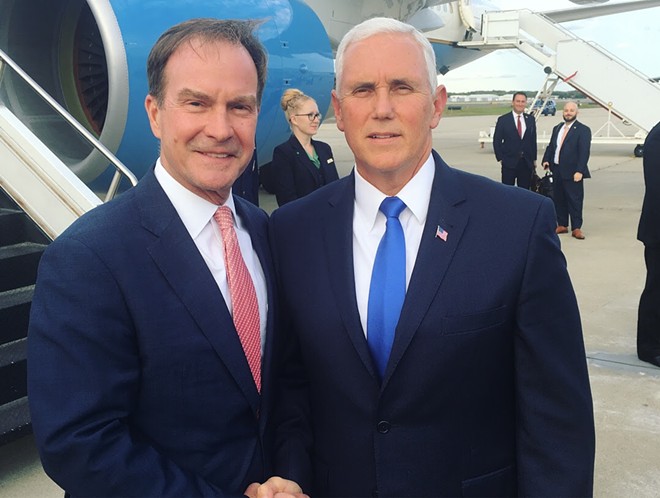 Hide your kids, hide your wife, creep Vice President Mike Pence will be in Detroit today. He's coming to town to hang with Michigan Attorney General and wanna-be Republican gubernatorial nominee Bill Schuette and talk up the Trump tax plan.

Politico reported Monday Pence would be visiting Michigan in support of Michigan GOP House candidates. He will hold an official event with America First Policies — a public policy nonprofit backed by President Trump — at the Westin Book Cadillac Hotel at 4:30 p.m., according to the group's website.

Pence tweeted he plans to speak about how the American economy is "roaring back" and he even wrote an op-ed about it in the Detroit News.

When I visit Detroit, I'll bring a message that the American economy is ROARING back to life. Biz large & small have created 2.5M jobs, including 58K in MI alone. But @POTUS & I aren’t content to coast. It’s time to hit the gas. Read my @DetroitNews op-ed: https://t.co/ChUkUBFWKl


Schuette told Politico Pence's visit is in part to "counter efforts by Democratic organizations planning to pour money into the state to boost their candidates."

Pence will also speak at a fundraiser in Southfield hosted by the Great America Committee PAC, Crain's Detroit reported.