We should all be embarrassed by Betsy DeVos' 60 Minutes interview 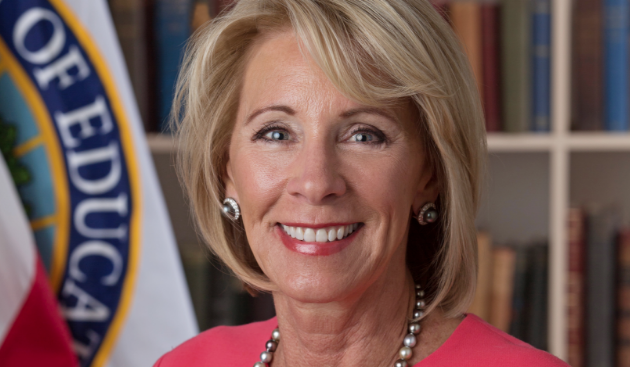 The miseducation of Betsy DeVos
Don't be fooled — Trump's secretary of education knows exactly what she's doing
By Jason Linkins and Phil Lewis
Local News
DeVos, a staunch advocate of school choice, says that relinquishing funding from public schools would actually make them operate better. She said that. She believes that.

Journalist Lesley Stahl spiked tough questions at DeVos, causing the education secretary to stumble several times. During one particularly tense volley, Stahl pressed DeVos about Michigan schools in particular, noting that many are failing, despite a plethora of public, charter, religious, and parochial options.

DeVos agreed she should probably visit some of her home state's failing districts, but admits she has yet to do so.

Stahl: Now, has that happened in Michigan? We're in Michigan. This is your home state.

Stahl: Have the public schools in Michigan gotten better?

DeVos: I don't know. Overall, I — I can't say overall that they have all gotten better.

Stahl: The whole state is not doing well.

DeVos: Well, there are certainly lots of pockets where this — the students are doing well and —

Stahl: No, but your argument that if you take funds away that the schools will get better, is not working in Michigan where you had a huge impact and influence over the direction of the school system here.

DeVos: I hesitate to talk about all schools in general because schools are made up of individual students attending them.

Stahl: The public schools here are doing worse than they did.

DeVos: Michigan schools need to do better. There is no doubt about it.

Stahl: Have you seen the really bad schools? Maybe try to figure out what they're doing?

Stahl: Maybe you should.

DeVos: Maybe I should. Yes.


DeVos, a billionaire from Grand Rapids, has been a lighting rod for controversy even before she was confirmed as Education Secretary. During her particularly painful confirmation hearing — DeVos admitted a root canal would likely have been a more comfortable situation — she was grilled by Democrats who found her to be largely unqualified for the position.

Speaking of guns, the interview came days after DeVos' troubling visit to Parkland, Fla., where students seemed dissatisfied, although not totally shocked, by her short visit. She reportedly granted an audience to a single student each from the school's newspaper, TV production class, and yearbook, and met with few other students during the 90-minute appearance.

Unsurprisingly, students are disappointed with Betsy Devos' visit to Parkland
By Alysa Zavala-Offman
News Hits
While many student survivors have expressed the need for increased gun control, DeVos has spoken in favor of creating a program to arm teachers. During the 60 Minutes interview, DeVos said it should be an option for cities and communities.

DeVos: I give a lot of credit to the students there for really raising their voices, and I think that they are not going to let this moment go by.

DeVos: They want a variety of things. They want solutions.

Stahl: Do you think that teachers should have guns in the classroom?

DeVos: That should be an option for states and communities to consider. And I hesitate to think of, like, my first-grade teacher, Mrs. Zorhoff, I couldn't ever imagine her having a gun and being trained in that way. But for those who are — who are capable, this is one solution that can and should be considered. But no one size fits all. Every state and every community is going to address this issue in a different way.


DeVos might benefit from increased gun control, however. She's the only cabinet member who is tailed by a team of U.S. Marshals wherever she goes due to an influx of death threats. You can read a transcript of the whole interview here.

And if you haven't done so already, you can read this week's Metro Times cover story, "The miseducation of Betsy DeVos," here.