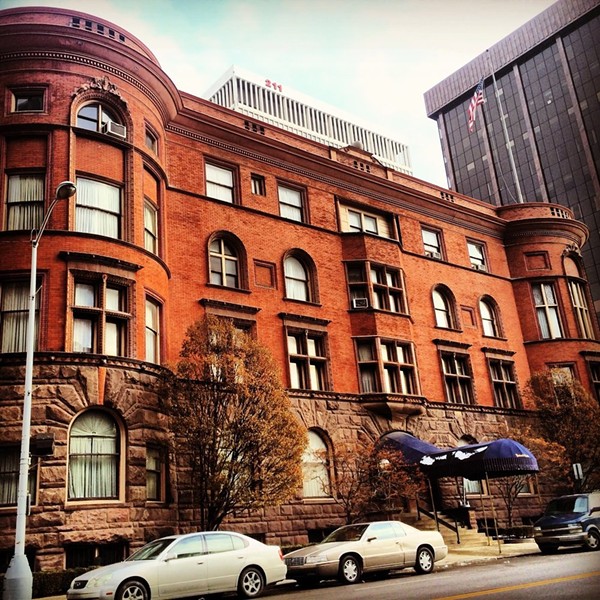 When it opened in the late 1800s, The Detroit Club served as a meeting place for local business men and industry leaders — a place where they could gather to talk shop and exchange ideas. The group quickly grew and what began in a small house soon moved to a newly constructed four-story building designed by Wilson Eyre.

The Romanesque Revival structure, located on the corner of Cass Avenue and Fort Street, remained operational for around a century and it served as breeding ground for the consumerism, industrialism, and economic growth that continues to shape our country today.

According to a short history on The Detroit Club's website a number of prominent Michigan politicians and businessman (yes, all men) visited the club. Those names include Hazen S. Pingree, James J. Couzen, Edsel B. Ford, Walter P. Chrysler, and James. W. Packard. The club also hosted five U.S. Presidents.

The club was closed for four years, but recently re-opened under new ownership. The Detroit Free Press reports that Emre and Lynn Uralli have poured millions of dollars into renovating the building. Uralli told WDIV the building has been "painstakingly restored from top to bottom."

Those renovations include a formal dining room and reception room, as well as the addition of 10 hotel suites, a spa, and a cigar bar.

While the club is accepting new memberships, the main dining room has been open to the public for about a month, according to a Detroit Club employee.

This Wednesday, March 21, it will open for lunch for the first time. From 11 a.m. to 3 p.m., diners can nosh on sandwiches, salads, and main entrees like beef medallions, eggs Benedict, or salmon. Lunch menu items range form $8 to $24. You can see the full menu here.

While the restaurant is open to the public now, it will eventually return to a private club that will require a membership to enter. For now, the Urallis are giving locals the chance to see the revitalized Detroit club for nothing for the cost of dinner.

The Detroit Club is located at 712 Cass Ave., Detroit.