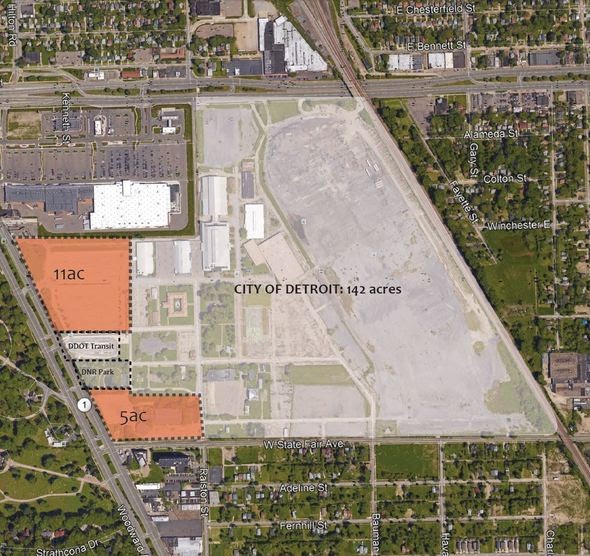 As the region buzzes with excitement over the prospect that the long idling Michigan State Fairgrounds site will soon be returned to productive use, some Detroit residents are charging that the deal leaves city taxpayers footing the bill for a developer that failed to fulfill its promises.


Under the terms of the agreement announced Wednesday, the city of Detroit will buy the bulk of the site from the Michigan Land Bank Fast Track Authority at a rate of almost twice what's to be paid by the private developer buying a smaller portion of the site. Detroit is to purchase 142 acres of the old fairgrounds for $7 million, while Magic Plus, LLC — the developer that’s been under contract to do something with the land for the past five years — will buy the remaining 16 acres of prime Woodward Avenue frontage for $472,000, based on a previously agreed upon rate. That’s a cost of $49,300 per acre for and $29,500 per acre for Magic Plus.

The Land Bank says the inflated cost for the city is the result of years of additional maintenance that had to be done on the site due to continued delays by Magic Plus, LLC. The preliminary agreement that had Magic Plus buying the full parcel for $4.65 million was struck in late 2013 with plans for the company to fulfill a series of requirements by the end of 2015 so construction could start shortly thereafter. But Magic Plus delayed the process for years — forcing the state to extend the agreement seven times as it paid about a million a year to maintain the land for possible development. Since that initial 2015 deadline, the state has paid more than $2.3 million to maintain the site — and it now plans to have Detroit pick up the cost.


“This just smacks of a sweetheart deal between the state and Magic Plus,” says Frank Hammer with the Greenacres Woodward Civic Association, a group representing the neighborhood across from the site. “The taxpayers are the ones left paying the tab for delays that were caused by the developer.”


Michigan Land Bank Fast Track Authority director Josh Burgett acknowledges the agency had the right to cancel the deal with Magic Plus as a result of the or to force the company to pay to cover the cost of maintenance, but elected to do neither.


“With them still having an interest in developing a portion of the property, it was important for us to honor that and not look to cancel the agreement or to cancel that with a price increment,” Burgett says, referring to the cost of maintenance.


He says the Land Bank opted to let Magic Plus keep the 2013 rate for the land because it saw the company’s failure to meet deadlines as a result of the complexity of the project. The company’s plan to, in the end, only a small portion of the land also played into the decision, he says.


“A development on that size of is tough enough as it is, then in two administrations within the city, environmental challenges on the site, historical significance, passion from community members — and that’s all part of what made this such a challenging project,” Burgett says.

“If we were sitting here today and Magic Plus was still looking to develop the whole property, we would be looking to get that price increment.”

But some community members aren't satisfied with that explanation.

'It’s another example of the long-standing tradition where Detroiters defray the cost of doing business for corporations.' tweet this


Magic Plus, LLC is a development firm made up of Earvin “Magic” Johnson, Detroit entrepreneur Marvin Beatty, and developer and Michigan State University trustee Joel Ferguson. Beatty is a principal behind the fairgrounds-adjacent shopping complex anchored by Meijer. Ferguson most recently made headlines for saying MSU had more going on than “just this Nassar thing” and laughing off the prospect of an NCAA investigation into the gymnastics doctor’s molestation of dozens of girls and women. Johnson has little to do with the day-to-day operations of the firm, according to Ferguson.


During a Thursday phone interview, Ferguson inaccurately stated the company had met all of the terms of its agreement with the state. He also would not acknowledge that he's getting a sweeter deal than the city, falsely saying, “[We're] going to be paying the same price the city is paying.”


“I’m not gonna get in an argument with people who don’t know what they’re talking about,” he said, referring to concerned taxpayers. “The city’s getting a fair price.”


He added, “I don’t think about what someone else is paying. I only care about the checks I’m writing."


The city would not address concerns that it’s on the hook for a developer’s inaction.

"Our deal with the state is completely separate from the Magic Plus deal with the state,” David Williams, a senior adviser for the Planning, Housing & Development team, said via email. “Our deal is fair and is based on a recent appraisal of the land.”


Ferguson says Magic Plus’ plans for the site changed last year when Michigan and Detroit were looking to lure Taiwanese electronics maker . It was then that he says the city expressed an interest in repurposing the site for light industrial use, with an eye toward job creation. Magic Plus’ initial proposal for the site, outlined in bid documents submitted in 2012, included restaurants and retail along Eight Mile Road, residential development along State Fair Road, and retail and office space along Woodward Avenue, according to Crain’s Detroit Business. The city, by contrast, has said it hopes the site will house at least one business that can employ up to 2,000 Detroiters.

Detroit's plan to buy most of the fairgrounds for $7 million requires additional approval from city council.