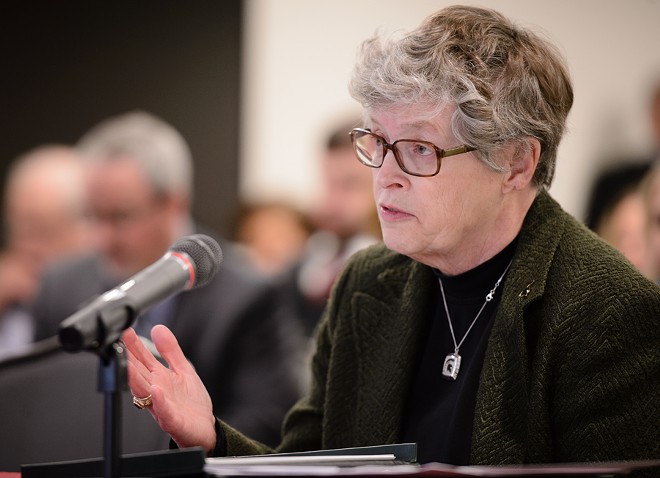 According to the documents, New York-based Weber Shandwick billed the university $517,343 for more than 1,440 hours of work in January, a time frame that included Nassar's week-long sentencing hearing in Ingham County Circuit Court. The firm sent daily reports summarizing social media reactions to the latest news, which included monitoring the accounts of Nassar's victims, the victims' families, journalists covering the case, politicians, and celebrities. The reports were sent to then-MSU President Lou Anna Simon, the university's Board of Trustees, and the university's in-house attorneys.

The bill included work done by 18 different employees, with hourly rates that ranged from $200 to $600 per hour. The firm is no longer employed by MSU.

This all prompts the question: What exactly did MSU gain from hiring the firm? By all accounts, the way the university handled the Nassar case, including Simon's resignation letter, appears to have been a total disaster.

"While we normally don’t comment on our client assignments, we feel it’s important in the case of the news coverage of our work for Michigan State University because it does not accurately reflect our work.

The majority of our work involved crisis counsel to address the tragedy. We were not hired to monitor victims’ social media accounts. As with any assignment, we forwarded to our clients traditional media and publicly available social media pertaining to the horrible tragedy at MSU, including statements made online by the victims.

The victims were and continue to be the most important voices in the conversation.

Our work began in late December 2017 and ended in early March 2018 after we resigned the account."


Total costs from the Nassar scandal — including legal fees, fines, and possible settlements for Nassar's more than 200 alleged victims — could exceed $500 million. As of earlier this month, the university had racked up $9.69 million by outside law firms and consulting firms, with most of that money going to six different law firms.

Earlier this month, interim MSU president John Engler said the university could be forced to raise tuition because of the scandal.

MSU students will likely pay more in tuition costs because of the Larry Nassar scandal
By Alexandra Fluegel
News Hits
Stay on top of Detroit news and views. Sign up for our weekly issue newsletter delivered each Wednesday.