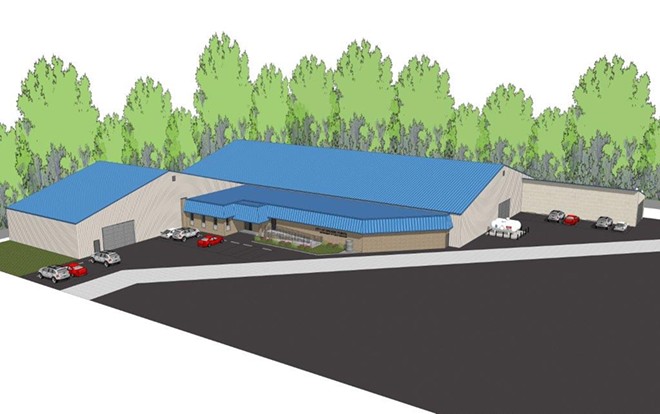 The city of Grosse Pointe is back to the drawing board after its recent failed bid to move its Department of Public Works site across Mack Avenue to the Detroit side.

You may remember our initial blog post about the matter. It was inspired entirely by an article in the Grosse Pointe Times that had been sent our way by environmental activists in Detroit. We thought the article was a strange one, as it featured angry Grosse Pointe residents, some holding placards depicting rats and cheese blocks, insisting that the DPW site attracted rats and that it should be moved to the Detroit side of the border. One of the city of Grosse Pointe’s own councilmembers called the site “an eyesore” that they needed “to get out of there now.”

As it turned out, we were right to be surprised by the article. Grosse Pointe Councilwoman Sheila Tomkowiak got in touch to fill in some of the blanks for us. She said that the DPW site hadn’t attracted rats in years. She insisted that the DPW site on the Detroit side would not contain trash. She alleged that the plan would renovate a Detroit property that had been an eyesore, and would represent more than $4 million in investment, hinting that more investment might follow.

When pressed, however, the councilwoman admitted that the plan’s supporters “did not do a good job — or really any job — of getting our story out to Detroit residents.”

That’s where the rub lies, in our humble opinion. When faced with a raucous bunch of community members sharing outdated information in support of an agenda known as NIMBY — “not in my back yard” — officials didn’t anticipate an equal and similar reaction from residents on the Detroit side. Grosse Pointe officials seemed utterly unprepared for the optics of a rich community parking its garbage trucks across the city line in one of the poorest big cities in the United States. In their feverish desire to seal the deal, they even expected community groups to warmly accept the “investment” and “beautification.”

If their plan were to have any success, it would have required the blessing of the site’s neighbors. Apparently, even though the city seemed prepared to make a legal fight over Detroit’s decision to nix approval, Grosse Pointe City Manager Pete Dame said the conflict boiled down to one stubborn reality: “The people who live closest to the facility don’t want it there.”

Not only is Grosse Pointe back to square one on finding a more appropriate location for its DPW site, it’s also out $20,000 in earnest money paid to St. John Hospital, owner of the property.

According to an editorial in the Grosse Pointe News sent to us by a reader, Grosse Pointers’ fingers are pointed at Detroit in blame. Blame was also apportioned for media outlets, as Detroit’s approval was deep-sixed “on the heels of negative media and social media coverage of the planned move.” (Hey, don’t look at us, guys: Detroit Corporation Council Lawrence Garcia’s letter is dated Jan. 25, 2018, the same day we published our blog at 2:30 p.m. While we wish we had that kind of pull, it’s ludicrous to think a blog post from us can have a permit yanked in two hours!)

Will any good come of this? Maybe. It sounds as though a belated courtship of Detroit’s community groups has begun, as at least some Grosse Pointe residents are renewing efforts to build relationships across the city line. In the end, however, it would have been much more productive to assume that the people on the other side of the border have the same anxieties, the same worries, and the same potential hostilities as Grosse Pointers.

It’s one thing to avoid “us versus them” as Councilwoman Tomkowiak wisely suggests.

But it’s another to seek out neighbors as full partners. Maybe that’s where this should have begun in the first place.