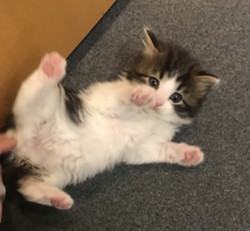 It was all paws on deck Friday morning as kittens took over the Troy Police Department.

Five kittens and one adult cat are in contention to be what TPD says will be the first-ever police cat in its newly instated Feline Unit. The winner of this purr- position will be selected later today.

On Tuesday, March 6, Troy police said they would adopt a cat if they reached 10,000 followers by April. The plea immediately spurred the use of #WeWantAPoliceCat and a flurry of furry memes. Less than two weeks later, the department exceeded its goal and announced that it'd be on the prowl for the first-ever police cat.

Sgt. Meghan Lehman, the woman behind the department's fire Twitter account, says this process has been a huge success. Although Lehman is allergic to cats, she is thrilled by the response.

"It's about community outreach and connecting with people and showing them we're human, too."

The vetting (petting?) process came down to sociability and energy as the five kittens ventured out of their crate and into the arms and laps of officers and media. One kitten, lovingly nicknamed Lipstick after rubbing on a reporter's face, seemed to be more of a S.W.A.T cat and became an instant favorite. Some tumbled, others cuddled, but all mewed.

Though the cat/kitten will not occupy the department full-time, the selected feline will be in the care of department dispatcher Katie, who will be making the spokescat selection.

"I'm looking for one that is personable, doesn't mind being picked up," Katie says. "I have two other cats so he/she will have friends."

As for a name, TPD says it will turn to Troy Public School students for recommendations. The final name will be selected, naturally, via a poll on social media.

The unselected kittens will be available for adoption in three weeks through the Westland Michigan Humane Society location.