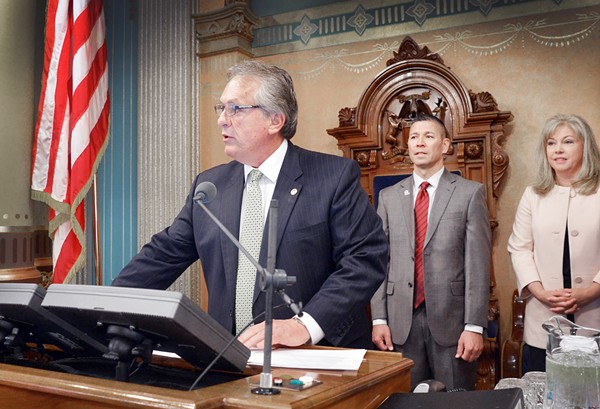 This week, as Flint residents were at the Michigan State Capitol rallying against an end to bottled water distribution in their city, Senate Republicans were tackling a far more pressing matter: celebrating the state's corporations.

The language of the draft resolution is painfully comical. "Corporations have been doing business as responsible citizens in the state of Michigan and around the world," it reads. "Independent organizations around the world assess and recognize these companies for their progress in protecting and nurturing the environment, operating with integrity, and creating great places to work."

Ultimately though, the introduction of the resolution was merely a symbolic nod to the corporations that flood the state legislature with money each year. In order to be effective for Thursday, it would have needed to pass the same day it was introduced. The draft only made it as far as a committee referral.

We've reached out to Nofs for clarification on what exactly he meant in the resolution — are all Michigan corporations responsible citizens who warrant celebration? Do they all nurture the environment and operate with integrity?

Because we can think of a few that don't check those boxes. We'll start down the street from the Metro Times office with Detroit-based Quicken Loans, found to have been the originator of many of the bad loans that precipitated the housing crisis. Mid-Michigan's Dow Chemical, meanwhile, most recently made headlines for pushing the Trump administration to scrap a scientific study that showed widely used pesticides were harmful to 1,800 threatened or endangered species. Then there's Amway, headquartered in the Grand Rapids area, which has drawn ample criticism for essentially functioning as a legal pyramid scheme (one that helped line the DeVos family's pockets with money that would be spent to curry favor with politicians who would weaken the state's public education system. And shit, if we're gonna bring up the spawn these corporations have helped embolden, let us not forget Attorney General Bill Schuette, the trust fund son of Dow Chemical and possibly the next governor).

"This resolution is slap in the face to those who have suffered because of corporations who care more about profits over people and the Michigan Republicans who enable them," Lonnie Scott, the group's executive director, said in a news release. "Maybe some elected officials have forgotten this, but they’re supposed to work for the people of Michigan, not for-profit corporations.”

It's worth noting that the love Michigan Republicans have for the way businesses operate hasn't gotten the state very far. "Running the government like a business" led to the poisoning of Flint. The fact that its residents were on hand urging state lawmakers to take action the very same day eight Republicans reaffirmed their devotion to corporations, whose foremost purpose is to serve their own financial interests, is nothing short of poetic.