Metro Times honored with awards from Society of Professional Journalists 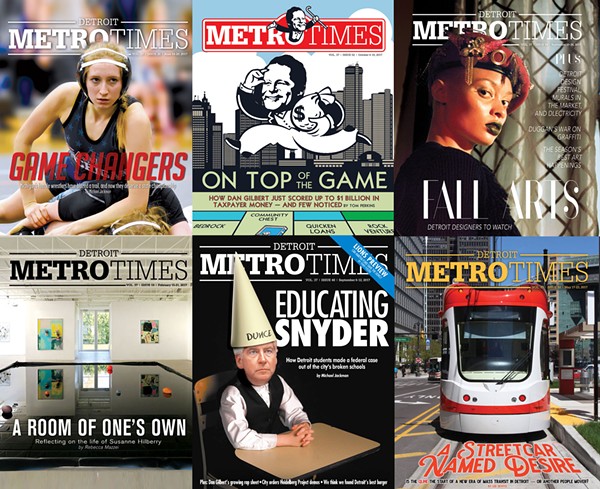 A number of awards went to MT's dining editor Tom Perkins — and were not limited to his coverage of Detroit's food scene.

Perkins earned first place in print, Class A: Open Government Reporting for his ongoing coverage of the scandal over Ypsilanti's "International Village" real estate development. (Since Perkins first reported on contradicting sources of funding for a trip city officials took to China, the development has been stalled, an independent law firm has recommended criminal charges, and Ypsi city council has handed the investigation into wrongdoing to Michigan State Police.)

Perkins also won third place in print, Class A: Consumer/Watchdog Reporting for his story on why some took offense to the name of the Detroit restaurant formerly known as Katoi. (Citing the report, the restauranteurs later rebranded as "Takoi.")

Metro Times also earned a number of awards in the "Explanatory Story" category.

For personality profiles, former MT arts editor Rebecca Mazzei earned second place, print, Class A for "A room of one's own," her look back at the life of the late art maven Susanne Hilberry. And DeVito (hi) earned third place for a profile on Rehab Addict host Nicole Curtis.

In a twist of fate, Jackman wound up walking up to accept the award for second place, print, class A: Sports Reporting with his girlfriend, Rachel Timlin, who took the photos for "Game changers," his deep dive into the world of girls' and women's' wrestling. (Timlin, a former high school wrestler, wore her old wrestling sneakers to celebrate the occasion.)

As always, thanks for reading!