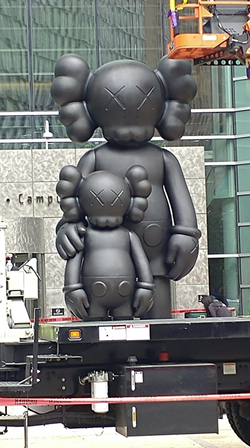 "The Spirit of Detroit." The Joe Louis Fist. The Alexander Macomb Monument. "The Hand of God." And now, "Waiting."

A new statue has entered the realm of the iconic in downtown Detroit — if only geographically speaking. Because unlike its older, more esteemed peers, "Waiting" is very — er, modern. More specifically, it looks like a couple of futuristic Disney mice with skull teeth.

The 17-foot-tall bronze statue went up in front of One Campus Martius on Friday. Paid for by unofficial downtown curator-at-large Dan Gilbert and his wife Jennifer, "Waiting" is said to be "synonymous" with Detroit's "momentum."

The statue was created by an out-of-town artist, KAWS, who began his career writing graffiti and now produces art that his bio says stands "somewhere between fine art and global commerce." According to the Detroit Free Press, the mouse figure is a recurring KAWS character called “Companion,” who represents the process of growing up. The price of the statue has not been disclosed, though KAWS has produced work valued at more than $1 million.

The new addition to downtown Detroit has been met with mixed reaction. Some (a couple of ladies from West Bloomfield with whom the Free Press spoke) have praised it as representing "new Detroit." Others tell media that "Waiting," with its dead eyes, is "bringing bad vibes down here, man."

A Reddit thread titled "So the creepy ass Mickey Mouse statue went up today....." had drawn 100 comments by late Monday morning. Below, we've compiled some of the praise and criticism expressed in the thread.

"It's so cool that we have a Kaws statue now. Keep it up Detroit!"

"I like it. Looks cool and it will attract visitors. Disregard the know nothing haters."

"I think it's awesome. Imagine if Detroit was full of thought provoking soul-filling art like this? Then it would fit in even more. The city needs culture and interesting art like this. Not more drab gray buildings."

"A world renown artist that is at the pinnacle of modern pop culture is having a showcase in Detroit, and everyone shits on it because it doesn’t fit their personal tastes."

"Soul filling?? It depicts a dead (zombie?) cartoon character. It is literally bereft of soul."

"This seems a bit out of place next to an elegant fountain, our city’s historic point of origin, and the reverent Soldiers and Sailor’s Memorial."

"Can't wait to see this eyesore going into work..."

"I'll be the first to admit I don't get a lot of modern art. I don't want to dismiss this out of hand, but it would be great if somebody offered an explanation of why they think it's good that went beyond 'The artist is world famous and his stuff sells for a lot.'"

"This would have been so much better if it was Robocop."