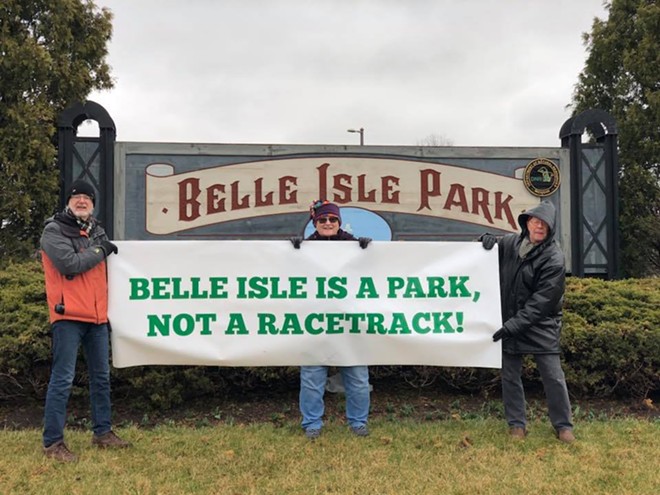 A group of local residents and park users opposed to the Detroit Grand Prix running on Belle Isle will gather on Saturday, May 26 at Belle Isle's entrance to protest the race.

The protest is organized by Belle Isle Concern, which is working to get the race removed from the island. The group's basic argument is Detroit's one-of-a-kind island park is supposed to be a state park and an urban respite, not a private IndyCar racetrack.
Though the three-day race organized by billionaire Roger Penske runs from June 1 to June 3, a large part of the island is a construction zone for at least 10 weeks each spring, and remediation of damage to the island lasts for weeks after that.

The construction causes traffic jams, does unknown damage to the environment, and generally turns Belle Isle into a giant headache for the entire spring season.
"We need that park for escape, relaxation and to get away from the day-to-day stresses in the city," says Belle Isle Concern's Sandra Novacek. "That's what we're protesting — the misuse of the public landscape for private use for 20 percent of the year."

Race organizers have said much of the island's southwest end remains accessible during the construction, but park users point out that Penske's team turns the island into a labyrinth of concrete barriers, fencing, grandstands, tents, and other materials for months leading up to the race.

"If you're going to visit a park, do you really want to go through a maze of barrels and concrete and other structures? That's not what people go to the park for," Novacek says. 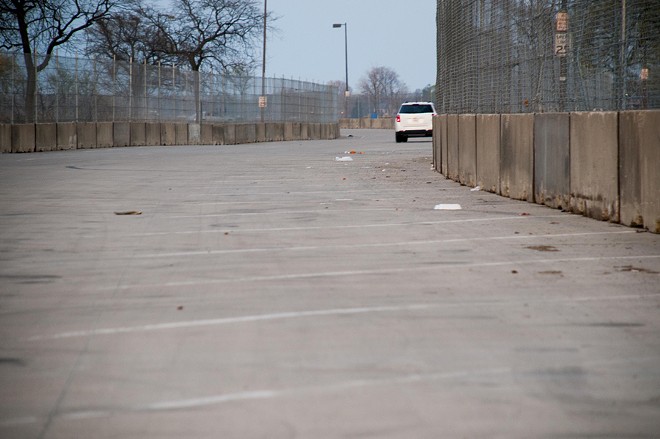 Though Penske's team noted that it cut a week off the construction period by starting set up on April 7 instead of April 1, Novacek says there are more tents up earlier, the race's footprint seems to be creeping east, there's more signage, and the race seems to be "escalating sooner."

She encourages residents to try to visit the island so they can see for themselves the scale of the construction, and what it does to the park experience.

"When people see how much and how early the race defaces the landscape, they're totally shocked," Novacek says. "If you're sitting in your living room in another part of the state, then you don't know the effect of this for park users who rely on it for exercise and recreation. It does make a really big difference."

She adds that the race is not in line with the mission of the Michigan Department of Natural Resources, which manages the island park. The contract that allows Penske to use the park for the race expires this year, and the DNR is believed to be negotiating a new one.

"Their mission is to conserve, protect, manage, ... and to use the parks for the enjoyment of the state's natural resources for current and future generations," Novacek says. "We don't believe — and I don't think they believe — that a car race being held in the park is really in keeping in with that mission.
"We citizens are paying the state taxes for maintenance of our park and an annual fee to use the park, but for about 20 percent of the year, 20 percent of the island is restricted."

The protest will be held from noon to 2 p.m. on Saturday, May 26 at the entrance to Belle Isle on Jefferson Avenue.