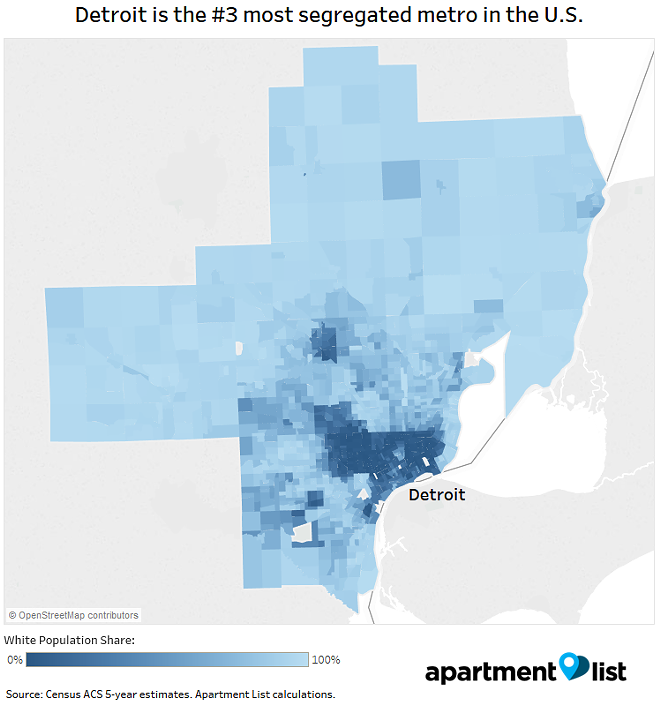 It doesn't exactly come as a surprise, but a new study from the number-crunchers over at Apartment List shows that metro Detroit is the third-most segregated large metropolitan area in the United States. (And this is 50 years after the passage of the Fair Housing Act.)

Here are some snippets from the study:

• Metro Detroit – defined in this study as the Metropolitan Statistical Area that includes Lapeer, Livingston, Macomb, Oakland, St. Clair, and Wayne counties – was only less segregated than the greater Cleveland area (No. 2) and the greater Milwaukee area (No. 1).

• Residential segregation is widespread, but many segregated neighborhoods were deliberately created to keep black families out of white neighborhoods.

• It should therefore come as no surprise that residential segregation is highest in metro areas that were most established in 1970, and that African Americans remain the most highly segregated minority group.

•  Regionwide, segregation in metro Detroit is declining. Like many of the Midwestern “legacy cities” seeing the largest declines in segregation – such as Pittsburgh and Cleveland – Detroit is struggling with a stagnant local economy. The report concludes that "declining rates of residential segregation may not always coincide with better economic opportunities for minorities."

• Those living in neighborhoods with concentrated minority populations struggle more to pay rent.

• In a county-by-county breakdown, Wayne County, with its black population mostly in its northeastern section, led counties in segregation. Not too far behind was Oakland County, where the segregation index matched up with three parishes in Louisiana (Acadia, Grant, and Vermilion).