Detroit animals don't give a shit about sports 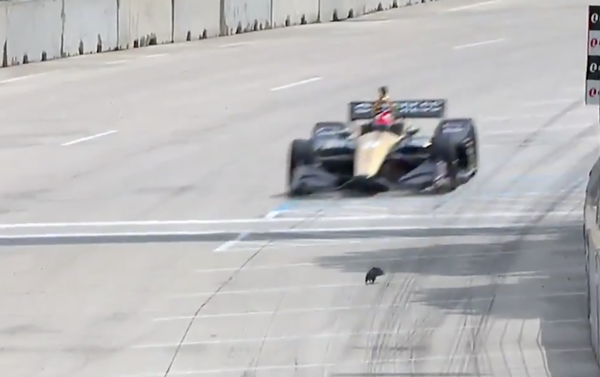 In perhaps the ultimate exercise of protest for this weekend's Detroit Grand Prix event taking over the natural beauty of Belle Isle, a daring squirrel took to the track during Friday's IndyCar practice.

In a nutty video posted on IndyCar Series' Twitter, the squirrel can be seen darting from the innermost lane across the track, forcing cars racing at speeds close to 200 miles per hour to swerve around a curve. The fluffy-tailed daredevil tempted fate three times and appears to have made it through the ordeal intact.

This is the second Detroit sports story to involve an animal encounter this week, both of which involve honking. During the Tigers game against the Los Angeles Angels Wednesday night, a Canadian goose wandered onto the field at the top of the sixth inning before making a failed escape by flying into a video board.

The fowl bird (get it?) was given the nickname "Rally Goose" and was taken into the care of Hamtramck resident Catherine Roache, a veterinarian who happened to be in attendance and nearby when the bird fell into the stands. After a checkup, the goose was released into Michigan State's wildlife ward, the Free Press reports.