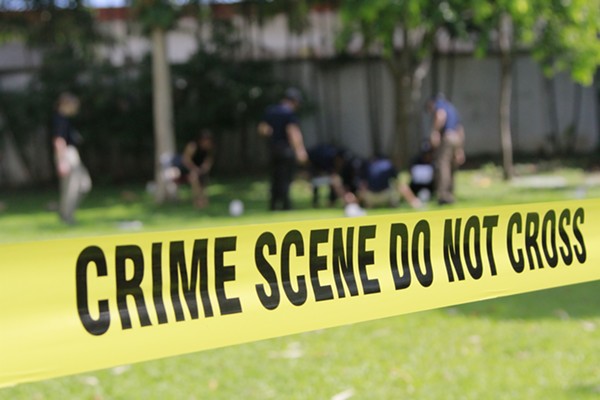 When Dawn Marie Ferguson was found stabbed to death in Eastern Market in May of 2014, a suspect was arrested by Detroit police and charged with first-degree murder within six days. Ferguson was a 49-year-old white woman.

A couple of days before her slaying, another person was killed about a mile away, near Gratiot and Brush in downtown Detroit. Brenden Andrews was a 26-year-old black man. His killer has still not been found.

The contrasting outcomes appear to illustrate a trend newly discovered by the Washington Post in a comprehensive data analysis of the last eight years of homicide cases in Detroit. According to the Post, arrests are more likely to be made in homicide cases in which the victim is white as opposed to those in which the victim is black. Between 2010 and 2017, the homicide arrest rate in cases involving white victims in Detroit was reportedly above 50 percent. In cases involving black victims, an arrest was made just 40 percent of the time. Homicides involving Latino victims saw a similar arrest rate. 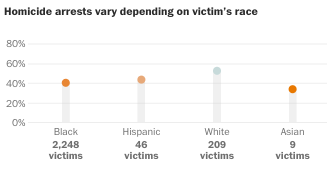 There were more than 2,500 homicides in the city over the eight-year period, the Post reports. About 2,250 of those victims were black, a little more than 200 were white, and about 50 were hispanic. The average homicide arrest rate in the city was 41 percent.

The Post also mapped low-arrest zones in the largest 50 cities in the country and found that nearly all of them were home primarily to low-income black residents. The analysis found Detroit has 21 zones with a high concentration of homicides and low arrest rates, and 1 zone with a high concentration of homicides and high arrest rates. While the zones are scattered throughout the city, the overwhelming majority appear to be located on the west side, in areas covered by the 2nd, 6th, 8th, and 10th police precincts.

The Detroit Police Department says the disparity in outcomes between black and white victims is not rooted in racial bias.

"We treat every homicide with the same amount of rigor," says deputy chief David LeValley. "A lot of factors go into solving cases, like the ability to collect evidence, the availability of witnesses, and the cooperation of witnesses. Some victims are engaged in lifestyles that don’t tend to cooperate with the police, and I’m not saying that’s necessarily race-based, but that's just the reality of what we have to deal with."

The Post's findings suggest the annual homicide clearance rate reported by the Detroit Police Department may have been inflated in recent years.

But some additional context is needed. The Post tallied cases in which a homicide investigation yielded an arrest, but the DPD says its homicide clearance rate includes cases that not only involve an arrest, but also cases that are "cleared" — meaning they were closed with sufficient evidence, but police weren't able to make an arrest, in most cases because the suspect was killed. The Post found there were only 16 "cleared" cases in Detroit in the past eight years.

"Certainly our arrest rate is going to be lower than our clearance rate because not every cleared case has an arrest but every case has a clearance," LeValley explained.

But when we pointed out that a discrepancy of 16 cases over eight years would likely not result in a significant statistical difference, LeValley disputed the Post's findings, saying he was sure the number of "cleared" cases was actually higher, though he was not immediately able to provide data to back that up.

The Post reports it came to its conclusions by "comparing homicide counts and aggregate closure rates with FBI data to ensure the records were as accurate as possible." In cases where departments provided only partial information about the homicides, the Post says it filled in the gaps by consulting public records, including death certificates, court records, and medical examiner reports.

LeValley did acknowledge that the DPD had, until recently, relied on an antiquated record-keeping system that had screwed up the clearance rates in the past. He cited 2012 as an example: That year, the system compelled DPD to report that its homicide clearance rate was just 11 percent, when LeValley says it was really likely closer to 40 percent. Notably, the Post's analysis appeared to bolster his argument: The paper found Detroit's 2012 homicide arrest rate was close to 40 percent, meaning its conclusions might be right for subsequent years, too.