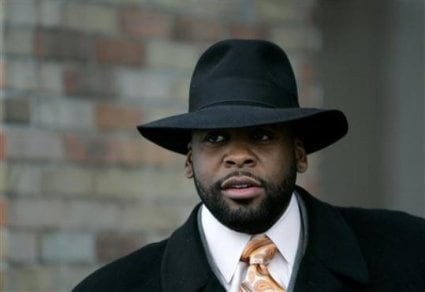 This is how it begins, folks.

Last Friday, the Detroit Free Press mused that Donald Trump might want to pardon Kwame Kilpatrick as a fuck you to the Justice Department, former president Obama, and people in general.

Yesterday, Kilpatrick — in the midst of a 28-year prison sentence for racketeering and other crimes — asked for that pardon.

Kilpatrick made the public plea on his "official" Facebook page and a new website to which local media outlets, including this one, have devoted a good deal of coverage. The Free Kwame Project is essentially a Kwame truther site aimed to improve perceptions of the ex-mayor, raise money for his legal defense, and give an outlet to his Jesus-laced ramblings.

In a blog posted to the site last night, Kwame says he's been transformed by the time he's spent behind bars and that he's "Ready For the Second-Half.. It’s Time."

"Our country has always been the land of 2nd Chances!" Kwame writes. "I am hoping, confidently expecting, that I will have the opportunity to boldly move into the next season of my life; outside of these prison walls.

"By God’s grace, I have received a pardon from Him, through Christ Jesus. I pray that I will receive the opportunity for Pardon/Clemency from the President of the United States as well."

According to the Free Press, Kilpatrick has also filed a formal request with the Justice Department to have his sentenced commuted. A commutation would shorten the length of Kilpatrick's sentence rather than wipe his conviction.

The request isn't all that far-fetched. Trump has pardoned the likes of former Maricopa County sheriff Joe Arpiao, conservative author Dinesh D'Souza, and a grandma whose cause was championed by Kim Kardashian. Recently, he has said he's considering pardons for Martha Stewart and former Illinois Gov. Rod Blagojevich.