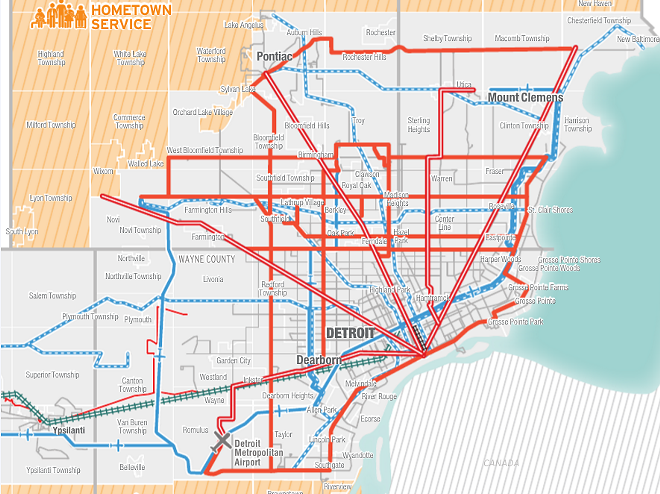 The Koch brothers have been fighting transit initiatives across the country — and may have played a role in the narrow defeat of a regional transit millage right here in southeast Michigan in 2016.

A New York Times article out today, titled “How the Koch Brothers Are Killing Public Transit Projects Around the Country,” chronicles how the Koch-backed group, Americans For Prosperity, recently managed to thwart an initially popular transit proposal in Nashville. It mentions southeast Michigan as another place where the group has had success in stymying public transit.

A Regional Transit Authority of Southeast Michigan staffer involved in the 2016 initiative said she was surprised to see our region mentioned in the article. But, as it turns out, in the weeks ahead of the November 2016 vote, AFP contributed to a radio ad campaign by a key opposition group, the NoMassiveTransitTax.org ballot committee. The ad warned voters they’d be forced to pay thousands for a plan that would worsen traffic. Following the vote, AFP credited itself with helping defeat the plan.

While AFP may have only been responsible for radio ads back in 2016, the conservative group appears to have added more sophisticated tools to its toolkit since then. The Times article keys in on a Koch-built data service that helps identify and rally voters aligned with the billionaires' political ideals. The Times describes it as a "particularly powerful version" of similar technologies used by the Republican and Democratic parties.

The Times article comes as the RTA considers a new regional transit proposal – Connect Southeast Michigan – that would create regional bus routes along key thoroughfares with stops every 15 minutes. The plan includes express bus routes to the airport and commuter rail service between downtown Detroit and Ann Arbor. If adopted by the RTA board next month, it go before voters as a 1.5 mill increase, which amounts to about $10 a month for the average house in the region, worth $157,504.

A spokeswoman with AFP's Michigan chapter says that the group currently has no plans to campaign against a possible transit millage in southeastern Michigan.

Matt Webb, chief operation officer of the Regional Transit Authority of Southeast Michigan, says he remains confident the plan will pass if adopted.

"Over the last two years we've been doing a lot of outreach and listening, and the Connect Southeast Michigan plan reflects a lot of the changes and modifications that we heard loud and clear from this region," says Webb.

The 2016 proposal lost by a margin of less than 1 percent.

Asked whether he fears that Americans For Prosperity will eventually attempt to derail the initiative, Webb says there would be little reason for the Koch-backed group to get involved in an opposition campaign, because "the focus of the plan is not removing vehicles from the road."

"I would encourage them to take a look at the content of the plan," he says. "It’s [about] providing more frequency of service, and more mobility choices, so the region has different choices as opposed to sitting in traffic."

Webb added that, though the Times piece highlights about a half-dozen examples of defeated transit initiatives, many recent transit investment proposals around the country have passed.

"What’s happening in other places is that communities are realizing they have to invest in transit to be economically competitive and to retain and attract new workforce development opportunities," he says. "You look at Atlanta, LA, Seattle, Indianapolis — all of them passed significant transit millage referendums in the last two years."

This post was updated at 5:04 p.m. on Wednesday, June 20 with additional information from the Michigan chapter of Americans For Prosperity.