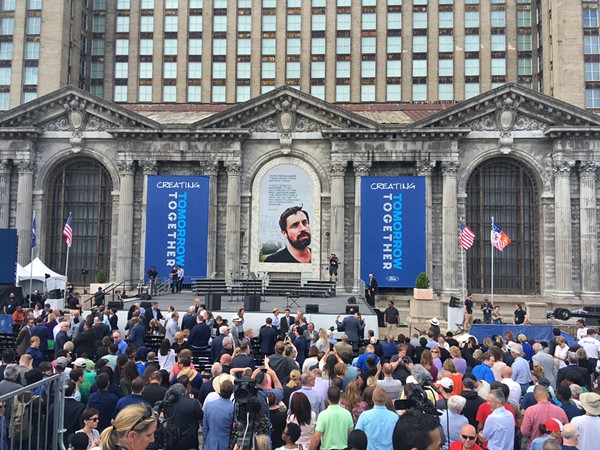 At Ford Motor Co.'s big Michigan Central Station celebration event on Tuesday, executive chairman Bill Ford took to the stage to a clip of indie-pop duo Jr Jr's "We Almost Lost Detroit." It was perhaps an unintentionally ironic song for the occasion, given his own company's role in the fall of Detroit and its once-grand train station.

"For decades this station was the place where you knew you’d arrived," Ford said of the long-abandoned train station, which will soon host Ford's mobility division, or autonomous car research and development, thanks to a stunning deal with the station's previous owners, the Moroun family. "Once the last train pulled out it became a place where hope left. As parts of Detroit hollowed out, so did this station. It became a symbol of the city's hard times, a monument to its struggles. It's time for that to change. It's time to remake this station into a place of possibility again."

Of course, he didn't mention that it was indisputably the automobile that led to the demise of the Motor City's train station — or that it was the internal combustion engine that caused many of the city's neighborhoods to get destroyed to make way for highways, and allowed people to flee the city to move to the suburbs, where the rest of the Big Three automakers had long since moved its factories.

Is the Motor City ready to say goodbye to the automobile?
The autonomous revolution comes to Detroit
By Lee DeVito
Local News
The denial of history extended further. "When the Lions returned downtown, I was told by a prominent businessman that our fans would never follow. But thanks to the best fans in the world, Ford Field has become an anchor of Detroit's comeback," Ford said. What he didn't mention was that it was under his family's ownership that the team was moved from Detroit to the suburbs in the first place, during the '70s, a time that writer dream hampton describes as "a corporate boycott of our super black city." (Ford was also very illuminating of the prevailing corporate attitudes that leaves a wake of destruction: "When the Rouge [plant] fell into disrepair, some senior executives said we should write it off and build a new plant somewhere, else," Ford continued. "But we rolled up our sleeves and built it better than ever.")

Eventually, though, Ford did acknowledge some of the negative consequences of his company — which is why the company is now focusing on mobility:

This station is a symbol, but Ford's investment in Corktown is anything but symbolic. We're making a big bet on our future. What Highland Park, Willow Run, and the Rouge were to the American economy in the 20th century, we hope Corktown will be to the American economy in the 21st century. I know that's a big claim, but this industry is going through some big changes. I think we all recognize when our industry didn't keep up, and we weren't thinking about the future in a responsible, sustainable way. Just as Detroit is going to re-imagine what it is going to be, we have to do the same because everything's changing, from how we build our cars, to what they run on, to the way we hail them, or even to drive them at all. You can look at that kind of change as unsettling, or you can see it as exciting.

My great-grandfather believed that the Ford Motor Company had two missions. One was to make cars affordable so that everyone had the opportunity to build one, and to make everyone's lives better. Well, today there are more than one billion cars on the road around the world, so you could say that we're meeting that first mission. But are we meeting that second one — are we actually making people's lives better? I've always believed that mobility makes freedom and progress possible. It allows us to live wherever we want.

Think about it, before the Model T most people never lived more than 25 miles form where they were born. But today mobility is getting harder to come by, and it's simple math. About seven and a half billion people live on the planet today. About 30 years from now, we'll have 10 billion. Most of those people will live in cities, and our current transportation systems are already straining enough as it is. The average American already wastes a few days each year stuck in gridlock, and that's nothing compared to some of the countries that are growing the fastest.

So now imagine doubling or even quadrupling the number of cars that are on the road over the next 30 years, and while the environment has always been a passion of mine, and making cars with fewer emissions is a challenge that we've been working on for some time, the reality is this — four billion clean cars on the road are still four billion cars, and a clean traffic jam is still a traffic jam. My great-grandfather once said, 'If I asked my customers what they wanted, they would have said a faster horse.' And for a long time the answer to this problem has been more lanes and more roads, but that's not really going to solve the problem. One hundred years after Henry Ford's assembly line revolutionized the industry, we're re-imagining mobility. We believe we can be a leader in re-thinking cities so that even as millions more people start to call cities home we can make the air cleaner and the streets less congested. And that means smart cars, but also smart roads, smart parking, smart public transit, and ways for all of them to talk to one another.

But why Ford? What can a company that's been around 115 years offer in terms of entirely new ways of thinking? Well, this company was born of disruption. We've all looked at innovation in a different way, and that's what we're doing again now.


So in that way, with the purchase of Michigan Central Station, Ford is disrupting itself.