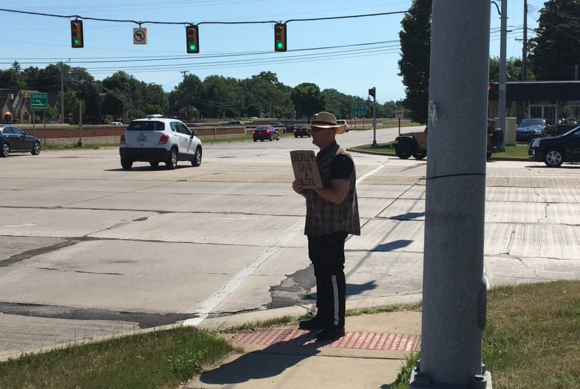 An undercover Michigan State Police officer this week donned plainclothes and held a cardboard sign at a metro Detroit freeway intersection to catch people who weren't wearing their seat belts.

And though the officer certainly looked like a panhandler holding a sign, a Michigan State Police spokesman wouldn't refer to it as that. He also wouldn't say that the trooper was intended to blend in with the setting to catch more violators.

The plainclothes trooper is described by MSP as a "spotter" who looks into cars and then radios to a trooper nearby to issue violators a warning or ticket. The trooper's sign read, "Buckle up save a life."

Asked three times whether the intent was for the trooper to blend in to catch more people without seat belts, MSP spokesman Lt. Michael Shaw said each time that, "Their intention is to catch people not wearing their seat belt." On the third ask, he said "I know what you're trying to get me to say."

To Shaw, the guy with the cardboard sign at the freeway intersection looked not like a panhandler, but a "cruise director." We would kindly disagree.

At any rate, to MSP, we might be burying the lead.

"Overall we found people are still not wearing their seat belts," says Shaw. "That's the important part for me. We will be dong [this] again for sure."

The M-39 crackdown follows a special enforcement period last month along M-10 the Lodge in downtown Detroit. Shaw says the crackdowns will continue on a weekly or bi-weekly basis this summer at different locations. He says he's not yet sure which area troopers will target next.