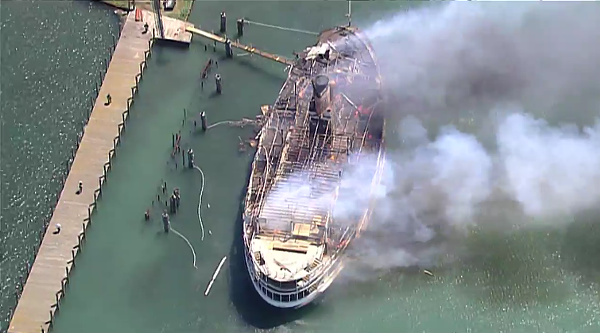 What do you do when fire engulfs an abandoned structure intrinsically tied to memories of Detroit's heyday? Apparently, you try to rebuild.

SS Ste. Claire co-owners Ron Kattoo and Saqib Nakadar, who had been renovating the boat with plans to open it to the public, have launched a GoFundMe to cover the cost of rebuilding the damaged boat. Their goal is to raise $500,000.

"We have lost everything and are reaching out to you for help," the GoFundMe page reads. "This ship holds sweat, blood, and tears, but most of all, love and memories. SS Ste. Claire is a Detroiter and will fight like a Detroiter."

The boat went up in flames Friday, possibly due to a spark from a welder who had been working on the restoration. After burning for hours, it's shell of what it once was, and many media outlets referred to it as having been "destroyed." Kattoo, however, begs to differ.

"She's well-built and she survived," he said in an interview yesterday with WDIV. "We are at the point in restoration to where it was a steel skeleton structure ready to be rebuilt."

Kattoo reportedly bought the boat for $250,000 in 2007. He said he believed rebuilding it would cost another quarter-million dollars. The boat, reportedly, was not fully insured.

The GoFundMe was set up two days ago, after WDIV reports Kattoo was "inundated" with requests that he continue the restoration effort. As of this morning, just $20 had been raised.