Is third time the charm for the Cass-Henry Historic District? 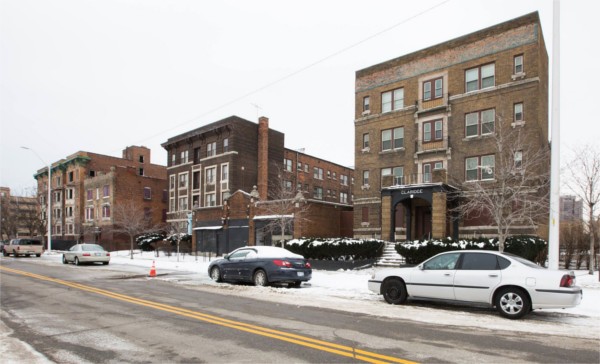 UPDATE: 2 p.m. July 10, 2018
After more than a dozen public comments in favor of the Cass-Henry Historic District, including several residents of the remaining occupied buildings, Detroit City Council voted to 8-0 in favor of establishing the district.

For the last few weeks, we have been watching as hearings on the proposed Cass-Henry Historic District were held, and as the matter was postponed again and again before it could be put to a vote.

At issue are a half-dozen or so buildings on the south side of Henry Street, between Cass and Second avenues. The structures are at the heart of a David vs. Goliath-type battle between Olympia Development, which has been tearing down structures and replacing them with parking, and preservationists, who love the buildings and the affordable housing they provide.

Since the beginning of this year, Francis Grunow, chair of the neighborhood advisory committee for Little Caesars Arena, has been making the case for a Cass-Henry Historic District, which would mandate the preservation of these buildings. To this end, he has spent the last six months addressing various committees and Detroit City Council, trying to sell the district. Grunow probably hasn't made any fast friends at Olympia Development by pointing out that "ODM has not only not rehabbed old buildings, it has actively demolished them, all while pouring millions into the creation of privately controlled surface parking." [Emphasis is original.]

A few weeks ago, he and many others expressed their support for the district, presenting it as not only in line with what Detroit needs, but in line with the vision Olympia Development has outlined for a walkable neighborhood. The hearings ended, and Detroit City Council suggested it would vote on the matter the coming Tuesday.

When that day came, they postponed the vote another week.

After that week passed, the body postponed the vote again.

This morning, they meet and, apparently, are prepared to vote.

As you probably know, the Cass-Henry vote was delayed till this Tuesday. Since the hearing last week, we've done some outreach to council members to try to encourage them to think more critically about the situation. Other than the personal attention from Olympia, it's unclear to me why they decided to postpone. I'm still not sure whether we have the votes, but hopefully there's been some more effective outreach over the last week.

Today I spent much of the morning and afternoon with Councilmember Castaneda-Lopez. There was a district wide bus tour followed by visits to both the Berwin and Bretton Arms on Henry Street. Prior to the apartment visit, Raquel said she had met with ODM on Friday, who said that they would be submitting a letter touting jobs and opposing the historic designation. Apparently, they're holding out for the whole block to do a single commercial project that would see all of those apartments bulldozed. However, they would not make any promises in writing.

At Berwin and Bretton met dozens of residents and explained the situation in terms of the upcoming hearing and vote. The vast majority of residents want to stay in the apartments. And while several voiced concerns about maintenance, bugs, etc., most seemed pretty happy with their living situation. We had connections to two residents who let us in. They will be circulating the attached flyer to residents over the next couple of days. Please feel free to forward if you'd like.

I plan to be there again on Tuesday (7/10) at 10 a.m. If any of you can make it for public comment, I'd be grateful. If you do make a statement, make sure you say that you are a Detroit resident, and what District you live in. And/or, if you'd be able to reach out the council members in the meantime, either via email, call, or text to encourage them to vote in favor of the proposed Cass-Henry District, I'd be grateful.


As for all those delays on the votes, Grunow tells us "Last week, the Ilitches got to council and convinced them for an extension. We've been working to connect with council over the last week. Hopefully, that will result in a different decision."

Grunow also noted that Olympia "actually seems to have started" boarding up the buildings at issue. He says, "There were boards going up at the Ansonia today."

What will happen at this morning's hearings? Who knows. But given the strong arguments that Grunow and others have put forward, if the council nixes the district, the optics will be unflattering to say the least.

In fact, the only worse outcome would be ... more surface parking.

Olympia Development did not respond to a request for comment for this story.