Watch these Michigan voters talk themselves in circles to defend Trump 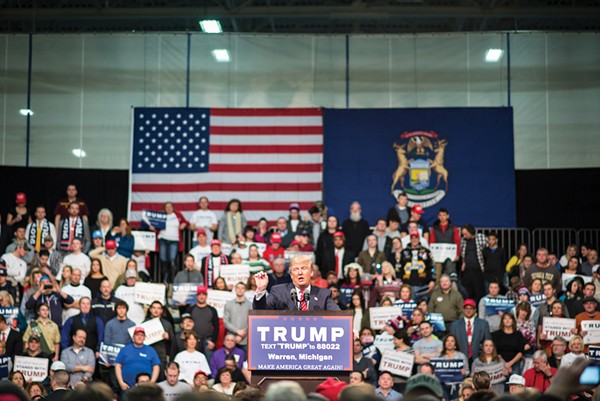 Many Americans are in an uproar following Donald Trump's Monday summit with Russian President Vladimir Putin in Helsinki, Finland. The conference took place at a time when western Russophobia approaches Cold War-era levels, and between economic sanctions on Crimea, Russia's backing of the Assad regime in Syria, and allegations of Russian interference in the 2016 U.S. presidential election, U.S.-Russian relations can only be described as icy at best.

But Trump did not take a hardline stance against Putin. Instead, he backed Putin's claim that Russia did not meddle in the election — which runs contrary to the findings of U.S. intelligence officials.

"I have great confidence in my intelligence people, but I will tell you that President Putin was extremely strong and powerful in his denial today," Trump said.

Trump's backing of Putin, a former KGB agent, has many members of the media and public shaking their heads in disbelief. But some Michiganders say it's A-OK — or at least, they don't care. The BBC's Channel 4 News reached out to Michigan Trump supporters on Wednesday to ask whether their faith had been shaken, and the response was a resounding, "No."

“I’m supposed to change my opinion about a President that's doing all kinds of amazingly positive things because of a one-hour press conference?”

Supporters of President @realDonaldTrump in Michigan defend his performance in Helsinki alongside President Putin pic.twitter.com/qHajTTfL90

The Michigan residents were hard-pressed to change their opinion about "a President that's doing all kinds of amazingly positive things" after "just a one-hour press conference" — even though they admit nobody knows what the two presidents discussed during a two-hour private meeting that day.

Although these Michiganders were eager to tout the President's track record, we have to ask — are their claims accurate?

Statistics pulled from the US Bureau for Labor Statistics by the Federal Reserve for Economic Data (FRED) suggests that Trump's high employment rate is the result of policies that were put in place before the election. Unemployment soared for African Americans and Latinos in 2010 with 16.1 percent and 12.7 percent, respectively. However, statistics demonstrate that the rate of unemployment has been on a downward trend ever since — something that cannot purely be credited to a Trump presidency.


When the Michigan residents were asked whether they believe if Russians meddled in the 2016 U.S. Presidential election, they responded with cocktail of contradictory responses: "No," "The United States meddles in elections, too," "What's sad is that President Obama chose to do nothing about it," "There's been for years," and "It didn't change the outcome."

Although Rauwerdink is correct — the U.S. has a long history of influencing the elections of foreign governments — U.S. intelligence officials agree that Russia interfered. (On Saturday, the Justice Department announced indictments against 12 Russian nationals as part of special counsel Robert Mueller's investigation of interference in the 2016 election.) And so does Trump, apparently — who has talked himself in circles defending his actions during the summit.

Trump took heat for a remark regarding his belief whether Russia had a hand in the election:


"My people came to me, Dan Coats came to me and some others, they said they think it's Russia. I have President Putin; he just said it's not Russia. I will say this: I don't see any reason why it would be."


But since the summit Trump has walked back his comments to clarify — he simply misspoke. Or at least, that's what he now claims:

For these Michigan Trumpers, perhaps they "wouldn't" be so quick to defend Trump if the President's own positioning wasn't still so ambiguous.