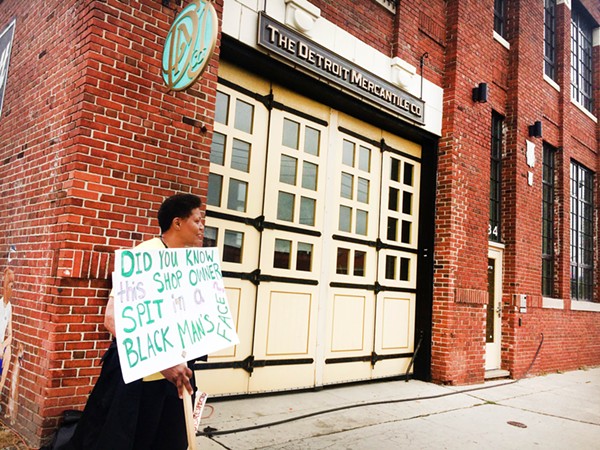 The Wayne County Prosecutor's Office charged the owner of Detroit Mercantile with misdemeanor assault and battery for a July 17 incident in which he spit in a young black man's face.

A video that went viral shows Robert Stanzler spitting in in the face of Ibrahim Muhammad Faisal over a dispute over parking in Eastern Market. Faisal was working security for an event at The Eastern venue. Witnesses told Metro Times that event attendees were parking in a lot that Stanzler claimed was his.

When Stanzler became upset over that, event attendees moved their cars, but Stanzler continued to berate Faisal. Witnesses say Faisal remained calm throughout the confrontation, pulled out his phone, and asked Stanzler to repeat for the camera what he had said.

At that point, the video shows Stanzler flipping off Faisal and spitting in his face.

"It is alleged that the defendant was upset about parking by others on his property when he made an obscene gesture and spat in (Ibrahim) Faison’s face," according to a news release from the prosecutor's office. "The victim provided cell phone video of the incident to the police."

It's the latest in fallout from the incident, which has also seen Faisal's supporters call for a boycott of Detroit Mercantile. Last week, Carhartt and Stormy Kromer announced they were pulling their products from its shelves. A biergarten that Stanzler was to launch on Saturday never happened, while several protesters stationed themselves outside the store and informed pedestrians and motorists of the incident.