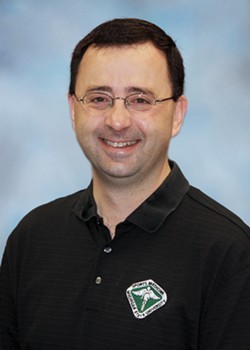 Aquilina's dark warning was likely in reference to the fact that the 54-year-old doctor is serving a de facto life sentence, with 60 years in federal prison, and an additional 40 to 175 years in Michigan prison. But another reading of Aquilina's words is the cold fact that child molesters are known to be among the most hated people in the prison social hierarchy — and can often be subject to harassment and abuse.

This could be true for Nassar. According to court documents obtained by The Detroit News, Nassar was assaulted "within hours of being released into the general population in late May" at the high-security United States Penitentiary in Tucson. No injuries were documented, and the News reports that prison officials say they are monitoring Nassar's safety and will transfer him if necessary.

Though the prison's population is 70 to 80 percent sex offenders, Nassar — whose sex abuse case was widely publicized — is likely the most notorious offender, having been charged with assaulting more than 250 girls and women while a doctor at Michigan State University and U.S. Gymnastics. Some of the girls were as young as 6 years old.


In the social hierarchy of prison inmates, mob kingpins, accomplished bank robbers, and cop killers tend to get the most respect. Convicts who have committed crimes against children, especially sexual abuse, are hated, harassed, and abused. Many inmates refer to molesters as “dirty” prisoners, and some insist that assaulting or killing them represents a service to society. But a convict’s crime plays only a small role in his social status and safety. Most jailhouse assaults happen because the victim violated prison norms, not because of the crime he committed on the outside. Those who steal tobacco, disrespect the members of an opposing gang, or snitch are in for a much rougher ride than the average molester.