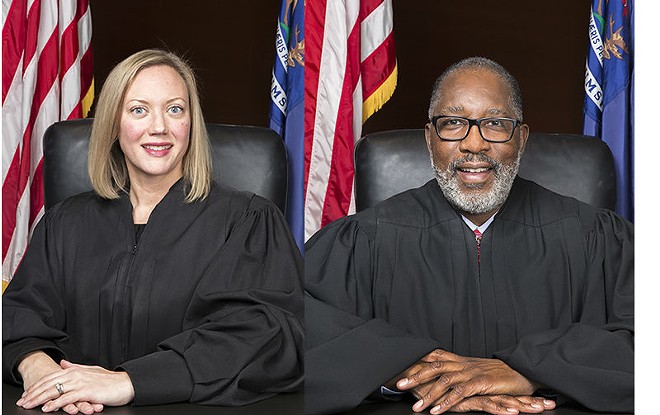 Michigan residents will vote in November on a proposal designed to end partisan gerrymandering of the state's legislative districts.

On Tuesday night, the Michigan Supreme Court ruled 4-3 that a proposal developed by the nonpartisan group Voters Not Politicians to create an independent redistricting commission as a fix for gerrymandered legislative districts can go on the Nov. 6 ballot.

VNP is proposing a 13-member commission that would be comprised of four Democrats, four Republicans, and five independent members who are not affiliated with any major political party.

Michigan legislators currently draw the legislative maps, but that's led to gerrymandered districts in which the balance of power isn't reflective of the vote. In recent elections cycles, Michigan House Democrats have received more or about the same number of votes as House Republicans, but Republicans hold a 63-47 majority. Similar scenarios played out in the State Senate and congressional districts.

The right-leaning Michigan Chamber of Commerce funded a Republican-led group that mounted a legal challenge to VNP's proposal, arguing that it was too vague and required a constitutional convention, not a simple amendment to the constitution.

"Because VNP’s proposal would leave the form and structure of the government essentially as it was envisioned in the 1963 Constitution, it was not equivalent to a new constitution and was a permissible amendment," the justices wrote in their decision.

Viviano and Clement are Republican appointees while Bernstein and McCormack were nominated by Democrats.

Chief Justice Stephen Markman and Justices Brian Zahra and Kurtis Wilder — all of whom are Republican-appointed — dissented. In the dissent, Markman said the proposal would amount to “governance by 13 randomly selected people entirely lacking in any democratic or electoral relationship with the other 10 million people of this state or its elected representatives.”

“The court’s decision upholds our right as citizens to petition our government for positive change,” Katie Fahey, founder and executive director of Voters Not Politicians, said in a Tuesday statement. “Hundreds of thousands of voters signed their name to have the chance to vote to bring the redistricting process out in the open.”