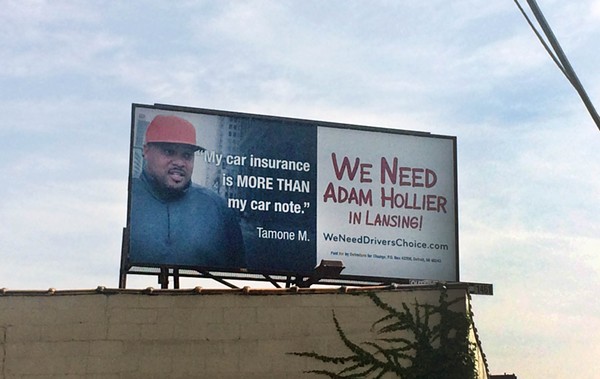 Fred Woodhams, a Secretary of State spokesperson, tells Metro Times that Adam Hollier, Marshall Bullock, Terra DeFoe, and the Detroiters for Change nonprofit are being investigated after the Bureau of Elections received a complaint about the alleged violations.

They stem from billboards that Detroiters for Change put up over a month ago around metro Detroit. The billboards say “We Need Marshall Bullock in Lansing,” “We Need Adam Hollier in Lansing,” or “We Need” any of several other Mike Duggan-backed State House and Senate candidates in Lansing.

But that could be illegal because the nonprofit appears to be expressly campaigning for the candidates, and Detroiters for Change is not disclosing where it gets its money. If a group is expressly advocating for a candidate, then state law requires it to disclose its funding sources and expenditures. If it doesn't, its organizers could be committing a felony violation of the Michigan Campaign Finance Act of 1976.

Woodhams says the Bureau of Elections received the formal complaint about the billboards from Saginaw-based trial attorney Debra Freid, who is president of the Michigan Association for Justice. Detroiters for Change also has a billboard for State Senate candidate and current House Rep. Sylvia Santana.

Multinational corporations, wealthy CEOs funding Duggan-backed Dems in state primary
By Tom Perkins
News Hits
Woodhams provided a letter to Metro Times that it sent to the candidates and Detroiters for Change. It states that Freid alleges the nonprofit "has leased billboards advocating for the three candidates named in this complaint and has failed to register as a committee and report these expenditures."

DeFoe and Bullock didn't immediately respond to requests for comment. Hollier tells Metro Times that he has "no involvement in those things. The Secretary of State is going to run through their process."

Woodhams said he couldn't discuss the specific case, but offered some clarification on campaign finance law. One issue is with the phrase “we need.” State law reads that individuals cannot “in express terms advocate the election or defeat of a clearly identified candidate.”

"If there's express advocacy, then groups need to report where came from and where it went," Woodhams says.

State law also lists examples of “express terms,” which include "vote for,”  "elect,” "support,” "cast your ballot for,” “Smith for governor,” "vote against,” "defeat,” or "reject.”

Beyond that, the complaint contends that the billboards lack the proper identification. The Bureau of Elections letter to the nonprofit and candidates reads, "If the billboard is an independent expenditure, it must contain the disclaimer: 'Not authorized by any candidate committee.'"

After auto insurance reform failure, Detroit Mayor Duggan seeks solutions, but also revenge
By Violet Ikonomova
News Hits
Woodhams says the investigation could take months. Though the violations are a felony punishable by jail time, Woodhams says the bureau typically tries to come to a "conciliation agreement" to resolve issues. That could involve anything from fines to a simple formal agreement in which the offender agrees not to commit the violation again. Cases "almost never [become] a criminal matter," Woodham says, meaning that the investigation likely won't be turned over to the attorney general's office for a criminal investigation.

Detroiters for Change could also be forced to reveal its funding sources.
Craig Mauger, director of the Michigan Campaign Finance Network, says the group and candidates are operating in a legal gray area, and a campaign finance violation in this case "is in the eye of the beholder — it's how the Secretary of State interprets" the term "we need."

Detroiters for Change previously told Crain's its funders are individuals and businesses "who are really, really concerned about auto insurance and the cost of it."

Regardless, the goals of Detroiters for Change align with Duggan and his auto insurance industry allies. Last year, Duggan vowed to campaign against State House Democrats from Detroit who voted against an auto insurance reform bill he crafted with Republican House Speaker Tom Leonard. The bill would have allowed motorists to purchase lower levels of medical care with their auto insurance.

But critics said it included a loophole through which insurers would not have to guarantee rate reductions. They also said insurers would not pass on the full savings from the personal injury portion of premiums to drivers, so all but four Democrats voted against it.

Detroit Mayor Mike Duggan borrows from Trump playbook of undermining media
By Violet Ikonomova
News Hits
Candidates featured on the billboards have said they will support driver's choice, and Duggan will likely push a similar bill next year.

The Michigan Association For Justice, which represents trial lawyers, claims it's trying to preserve the health insurance portion of Michigan's auto insurance law, which it views as a protection for motorists. That puts the group at odds with Detroiters for Change.