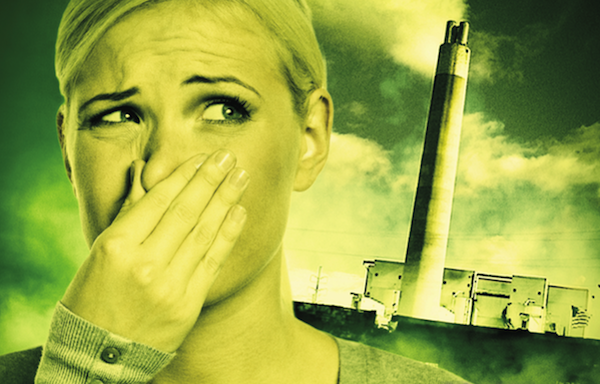 Residents in Detroit's redeveloping Midtown have been complaining for years about the smell of the trash incinerator at the intersection of I-75 and I-94.

See, garbage trucks don’t just bring garbage to the facility and throw it into the burner. The trucks drop the rubbish off at the facility’s tipping floor, where it accumulates as fuel until it is needed. Observers have described that the solid waste will sometimes accumulate into piles more than 30 feet tall.

Let’s just say that you don’t need a bloodhound to grow all too aware of the stench — it can drift onto the freeway on a hot day.

In fact, local laments about the plant’s pungency are so numerous that they’ve apparently even reached the nose of the state attorney general’s office, which now seems to be adopting a more aggressive posture toward the facility.

That posture is embodied in a July 31 letter obtained by Metro Times, in which Michigan Assistant Attorney General John Fordell Leone informs lawyers for the facility that whatever they’re doing to contain the odors of decomposing “fuel” isn’t enough, requiring more measures than those called for by the current consent judgment the plant operates under.

As a publicly available file server shows, the plant operators and DEQ staff have been going back and forth over odors for quite some time.

The correspondence is often unintentionally amusing, with plant employees cautiously and clinically attempting to downplay their facility's funky-ass garbage odor. The incinerator staff use such words as “allegedly” and “reportedly” to describe the sour odors anybody with a nose knows emanate from the facility.

This is nothing new, really. As one MDEQ official quoted in a story in the Detroit Free Press said, “A lot of times, they disagree that there is even an odor problem.”

In response to a violation notice dated June 29, the big burner’s owners stop just short of questioning the department’s findings. The facility has a rigorous Odor Management Plan, and, hey, the plant manager went outside and said he didn’t smell anything worse than Level 2.

To paraphrase a quote from Upton Sinclair, “It is difficult to get a man to smell something when his salary depends upon his not smelling it.”

Related Why the Detroit incinerator is costly, dirty, smelly, dangerous — and unnecessary

Why the Detroit incinerator is costly, dirty, smelly, dangerous — and unnecessary
By Michael Jackman
Local News

But as the attorney general’s letter explains, not only did people complain, but state staff arrived on-scene and substantiated the calls with their verdicts on the “alleged” smells. Assistant AG Leone writes that the department’s Air Quality Division fielded 200 odor complaints between June 5 and Dec. 31, 2015; 88 percent were confirmed by on-site observers and attributed to the facility. The division fielded another 200 odor complaints for 2017; field investigators attributed 90 percent of the complaints to the facility. The division received another 75 odor complaints from Jan. 1 to June 15, 2018, and field observers verified about 86 percent as coming from the facility.

If a complaint is substantiated, it can result in a violation notice. For example one violation notice, issued the same day as the AG department’s letter, found “moderate to strong, consistent garbage odors … detected in residential areas downwind of the facility which were traced back to Detroit Renewable Power. In the AQD staff’s professional judgment, the odors observed were of sufficient intensity and frequency to constitute a violation …”

With so many complaints, and even specific demands that the state AG take a stand, push has apparently come to shove. According to the letter of July 31, Detroit Renewable Power and its attorneys have 21 days to decide whether they dispute the department’s findings.

The turn of events is kind of a big deal.

"It is extraordinary," says Margaret Weber of Zero Waste Detroit. "It takes the state a long time to take legal action. No official has suggested it wasn't enough. The community's consistent complaints have been an enormous factor in pushing the state to act."