This map claims that Michigan actually elected 'Nobody' in 2016

The Trump administration has been entrenched in more scandal and faced more questions about its legitimacy than any of its predecessors.

That includes everything from Trump winning the election with fewer votes than Hillary Clinton to Russians interfering in the election, all of which has made him the recipient of strong criticism.

Needless to say, it's been a rough go for Mr. President.

Now, a map created by Phillip Kearney suggests that if American abstention votes had counted as actual votes, the country would have actually elected nobody.

The map breaks down each state county-by-county to show which areas had less than majority voter turn out. As it happens, some 30 percent of voters didn't vote for anyone – which is more support than either Trump or Hillary managed to garner. In fact, according to the map below, only 12 states would have picked a clear electoral winner. Meaning that in this scenario, of the 538 electoral votes in 2016, 445 votes would have chosen to elect "Nobody." 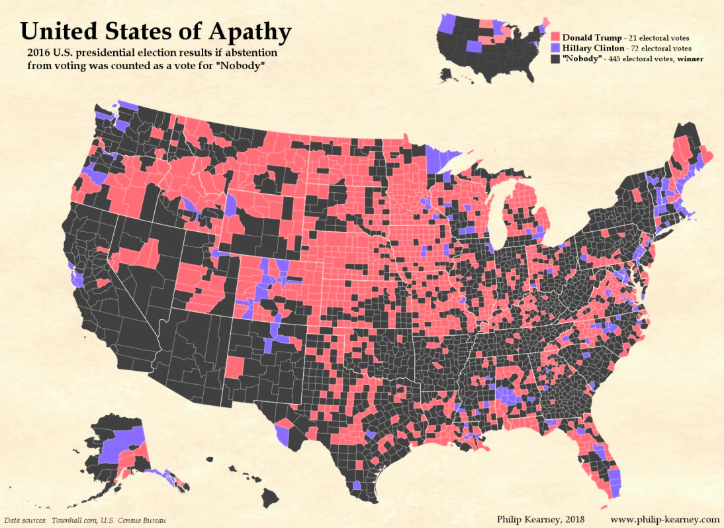 So what does this tell us?

It wasn't your progressive friends that voted party that lost the election, and it also wasn't your weird cousin that voted for Bernie and then flipped for Trump. The 2016 Presidential election was lost by the citizens who chose not to vote at all.