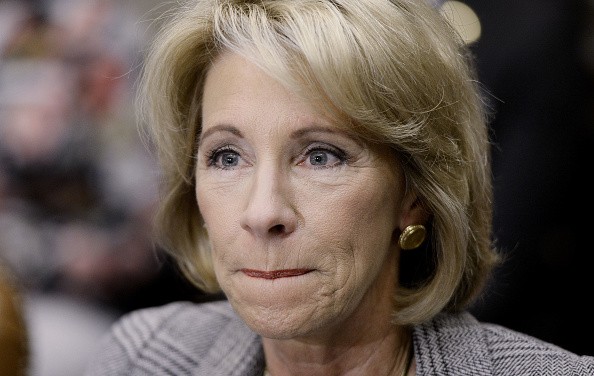 Grant money designed to pay for things like art, music, technology, and mental health programs in the country's poorest schools could eventually be used to help schools buy guns, under a plan being considered by Betsy DeVos' education department.

Survey finds Michigan teachers don't want to be given guns to deter school shootings
By Lee DeVito
News Hits
The idea was reportedly prompted not by a grizzly bear attack, but by school shootings and inquiries from the state of Texas. It drew swift criticism from Democrats Thursday:

It’s hard to tell if @BetsyDeVos is leading the Department of Education or the NRA.

This idea is appalling and incredibly dangerous.

How is it we can't fund smaller class sizes for our children, yet the Trump Administration can find millions to appease the gun lobby? https://t.co/E2VQQWO9eh

Many schools can barely afford nurses or counselors for students – and teachers dip into their own pockets for basic supplies. Now @BetsyDeVosED wants to allow schools to use limited federal education $ to put guns – GUNS – in classrooms? That's the dumbest idea I've ever heard. https://t.co/b79CP4xZIe

Betsy DeVos' proposal to use federal funds to put more guns in our schools is a terrible idea. Let's pass reasonable gun safety reforms to keep our kids safe – and give teachers the tools they need to do the job they already have: educating our students.


According to the New York Times, the law behind the pot of academic enrichment money DeVos may allow schools to use to buy firearms is silent on the issue. The paper reports that such omissions allow the head of a federal department to use their discretion to approve or deny plans for how states use the money.

Someone started a petition to replace Betsy DeVos with Lebron James and honestly it's not a bad idea
By Jacob Stocking
News Hits
The only hope to keep the money from being used for weapons purchases, the Times reports, would be for Congress to clarify the law or bans such funding through legislative action. Earlier this year, Congress passed a school safety bill allocating $50 million a year to local districts, but expressly prohibited the use of the money for firearms.