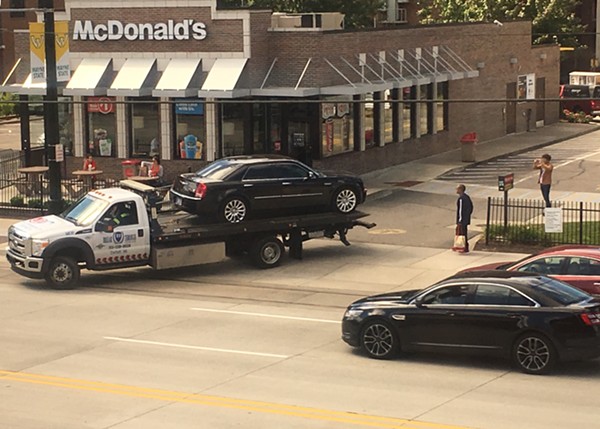 This story was updated at 1:47 p.m. on Wednesday, Sept. 12 with comment from McDonald's.

On an almost daily basis, we at the Metro Times observe some poor soul's vehicle being towed from the Midtown Detroit McDonald's, thanks to our bird's-eye view of its parking lot.

We assumed that the cars were just illegally parked, but a new video making the rounds on the internet suggests that may not always be the case. Footage from the restaurant's parking lot shows Breakthrough Towing — a company that's been described by police as "predatory" — attempting to pull away the vehicles of people who say they're customers. It's the second scandal to beset the company in recent months; Breakthrough Towing this summer came under fire for hauling cars from a CVS in Hamtramck after hours and allegedly without permission.

Signage posted at the McDonald's on Woodward near Canfield designates the area as reserved exclusively for customers, stating, "All others will be towed at owners [sic] risk & expense." The sign has the McDonald's logo on it, as well as the logo of Breakthrough Towing.


But a photographer who recently visited the area says he learned that being a customer at the eatery might not be enough to prevent getting towed. Jason Lanier was made to pay $445 in cash to retrieve his vehicle last week after it was towed from the lot, according to his commentary in a YouTube video on his experience.

Lanier claims a "spotter" waits across the street and calls Breakthrough Towing when he sees cars parked for too long, even if customers are in the restaurant. In footage captured by Lanier at the establishment the day after his ordeal, a Breakthrough tow truck can be seen apparently pulling up to take a vehicle with handicap tags from the lot. Before the tow truck driver has the chance to strike, a woman who says she was a McDonald's customer appears with a child by her side, seemingly baffled as to why her car is about to be taken.

"What is going on?" she asks Lanier as he films. "I've only been in there like 10 minutes."

When Lanier tells the woman the truck driver has come to tow her, she responds “For coming to McDonald's? Makes me not wanna come here anymore." 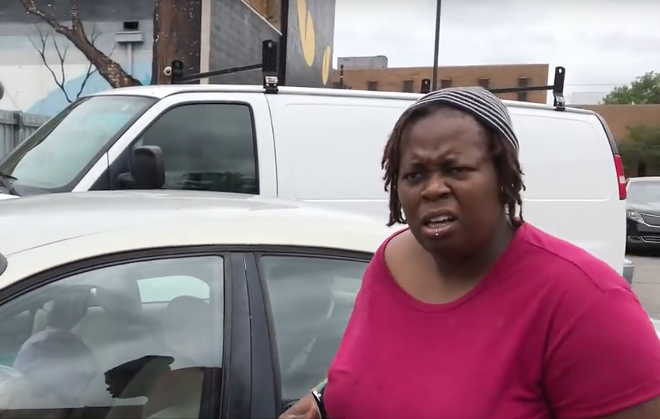 In the video, Lanier says the tow truck had initially arrived to take his vehicle, and produces a receipt to show he'd been in the restaurant just 10 minutes prior. When Lanier presents the receipt to the tow truck driver, the driver says he doesn't believe him.

"You went there afterward, everybody does it," the driver says.

We weren't immediately able to get in touch with the manager of the McDonald's franchise. The day after this story was published, we spoke with McDonald's corporate brand manager Phil Saken. He questioned Lanier's credibility, saying Lanier had parked in the McDonald's parking lot and gone into a different restaurant the day he was towed. Lanier did not respond to an email request for comment.

Saken also claims the woman in the video was never going to be towed, though the video shows the tow truck backing up toward her car.

Saken calls illegal parking at the restaurant an "ongoing problem."

"Time and time again, people who use that parking lot go into the HopCat, go into Whole Foods," he says.

The McDonald's location is operated on an interim basis by Dominique Virgiles. The former owner-operator of the location died, Saken said.

In the hours after this report was first published, we received a flurry of comments and emails from former McDonald's customers who said they have been improperly towed from the lot. We are compiling a follow-up report with their stories.

"There's really no time limit for how long people can park there," Mike says. "They call us to come get the car, we get the car."

As we spent the afternoon trying to gather information for this story, we noticed a man in a black Lexus idling across the street from the McDonald's.  By the time we wrapped up this draft, he was still sitting in the spot and had been there for more than two hours. When we walked outside to confront him, the man said he did not work for Breakthrough Towing, demanded we get a cell phone "out of his face," and then asked, "who's Breakthrough?" The man then rolled up his window and made like he was driving away, but remained in the spot only to begin staring into the parking lot again.

Within seconds of the exchange, we received a call back from Mike, the Breakthrough co-owner.

Earlier in the day, when a Metro Times reporter confronted the driver of a Breakthrough tow truck as he pulled a vehicle from the McDonald's lot, the driver said "We got license here, I'm gonna smack that camera out of your hand."

Having "license" to operate is a particularly thorny issue for Breakthrough. The company recently made headlines in Hamtramck when the manager at the CVS at Holbrook and Joseph Campau said Breakthrough was towing cars from the business' lot without its authorization. It's not clear who the company would have needed authorization from — there seemed to be a bit of confusion as to whether the city or CVS owned the lot.

Mike of Breakthrough told Metro Times that the company did have a contract to operate at CVS. He texted a photo of an agreement with CVS signed "Mike Kyle - manager" and dated Aug. 27, 2015. A call to CVS to confirm whether a Mike Kyle worked there and had signed the document was not immediately returned.

The purported contract says the owners of vehicles towed will be charged a $375 impound/recovery fee, plus a daily fee of $8 for each additional day the vehicle is held. 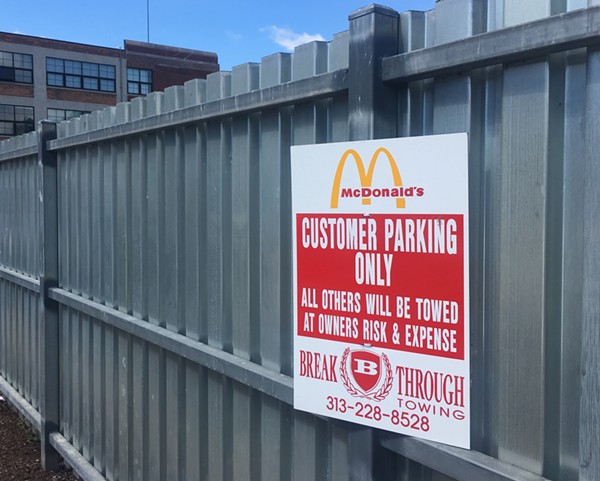 "I see them sitting in the area in their tow trucks," says Sergeant Cary Glazer.

While he couldn't say whether Breakthrough uses spotters specifically, he said the practice is common among tow truck companies operating in Midtown. As for Breakthrough, Glazer said, "They come so quickly that somebody has to be contacting them.”

The company has been the subject of some nasty online reviews, including some from people who've had bad experiences at the Midtown McDonald's. At least 25 complaints about Breakthrough have been filed with the Better Business Bureau just this year. In a complaint dated Jan. 22, one person calls the business "absolutely appalling:"

They are in some kind of espionage deal with the ********’s on Woodward and Canfield. They tow their own customers if they feel that people have been in the restaurant for too long. My handicap accessible vehicle was towed from a handicapped spot, even though there was no sign on it saying that it was a tow-away zone. I need this van to be able to have transportation. I was stranded when they towed it from ********’s Because I have no way of getting into a different vehicle. The ********’s hire people to be posted in the parking lot to call the towing service. I have already contacted the ********’s perforation to deal with issues I’m bad end. The actual charge to pick up your car is $395. However, over the phone they told me that I would have to pay $470. I imagine at this extra money would go to the ********’s. They are definitely in on something together.

Saken denied that McDonald's is playing any role in a possible towing scheme.