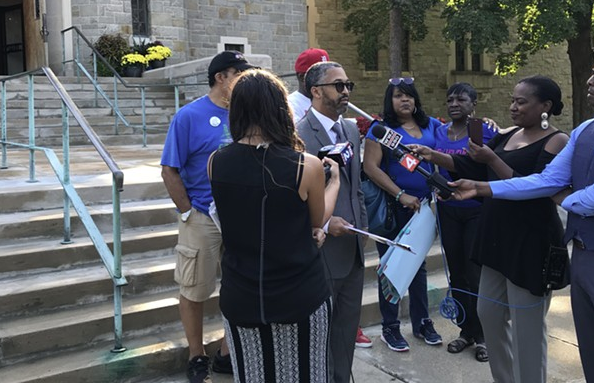 Davis — flanked by members of his staff, community activists, and parents with children who have been victims of gun violence — says that ammunition, not guns, should be a focal point of regulation.

“A gun is just a gun,” Davis says. “Bullets kill. Right now you or I can show up to a store or fair with no identification, spend $20,000 on bullets, and walk right out of there.”

Davis is also proposing heightened background checks on purchasers of ammunition who might have a history of a mental health illness. He says that ignored mental health problems have contributed to a scourge of gun violence in Wayne County.

“When I have spoken with Wayne County Sheriff Benny Napoleon and looked at the numbers for residents of Wayne County, we have seen that there are thousands of people who should not be there, but are as a result of a mental illness that has pushed them to criminal acts,” he says.

Tom Wilson, a community activist in Wayne County, agrees that mental health was an important consideration when addressing gun violence.

“I worked in mental health for almost 30 years, children up to adults, and a lot of these folks who have problems with guns, there are certainly elements of mental health issues in there,” says Wilson.

Detroit is facing problems in both mental health and gun violence. A study conducted by WalletHub in July this year ranked Detroit as the most "health and safety stressed" city in the United States. And according to FBI Data, in 2016 Detroit saw more murders than Los Angeles, a city with four times as many people, earning it the unenviable distinction of "most violent big city" in America.

Putting Detroit’s improving crime picture into context
By Violet Ikonomova
News Hits
For Davis, the gun violence issue in Detroit is as much personal as it is socially responsible. Davis’s uncle and brother, both buried at Woodlawn Cemetery, are victims of gun violence. After Davis’s brother Vito was murdered in an attempted robbery in 2001, Davis promised himself that he would remember Vito by fighting against gun violence.

“I said to myself and to my brother Vito, who was assassinated at 19, that it was my goal to fight for gun violence issue in his memory,” says Davis. “Being Wayne County commissioner I want to make as much change as I can.”

As part of the Wayne County “Bullet Bill” that Davis is proposing, ammunition buyers would need to undergo a mental health background check with their local police department or the Wayne County Sheriff’s Department.

The ordinance would also impose additional county taxes on the purchase of ammunition with the revenue being used to assist victims of gun violence and educational programs centered on conflict resolution.

Davis says the ordinance would follow in the footsteps of legislation already proposed in California to mandate serial numbers or other traceable markers on ammunition so that the police can more easily track them.

Though Davis has already put in motion a plan to work with state legislators, the Detroit City Council, and Debbie Stabenow’s office, he expects that he will experience pushback.

"My team and I will prepare to make this an ordinance, which could be a tough legal battle, being that gun laws are pretty much the responsibility of state and federal law," says Davis,

Still, Davis says that he will continue to fight until the goals of his program are even considered on a national level.

“In my brother Vito’s name and my uncle Ricky who died as a result of gun violence, we plan for the bullet bill to become federal law,” he says.

“I plan on taking this to City Council with Rev. Spivey, Mary Sheffield, Brenda Jones, state legislators, but, Mr. President, if you see this, this is very important,” Davis says.

“Let’s sit down today Mr. President and talk about how we can make these changes so we can see the effective change in cities like Detroit,” he says.

Susan Watson and Bernice Reed, both Detroit mothers who lost their sons to gun violence, held a poster behind Davis displaying the names of young men who had been killed by gun violence.

Watson, whose son Leroy was fatally shot outside of a Family Dollar on July 29, 2015, agrees with Mr. Davis’s characterization of Detroit as the “wild, wild West.”

“This is enough, it’s enough. It’s time to stand up and speak up. Please, thank you,” says Watson.