There's plenty of reason to believe that the Midwestern states that helped land President Donald Trump his surprise victory in 2016 are having buyer's remorse — whether it's because of Trump's repeated attempts at cutting Great Lakes funding, the culture wars waged on the African-American and Arab-American communities, a lack of confidence in the economy, or just an understandable fatigue of the daily chaos created from the President's Twitter addiction.

But the pendulum might be swinging back. According to the poll, more than half of likely voters in those five Rust Belt states think the country is now on the "wrong track," and more than one-third of voters are "very motivated" to back someone who would oppose Trump.

That distaste has given Democrats leads in most of the upcoming races for Senate and governor, the poll finds. In Michigan, Democrat Gretchen Whitmer leads Republican Bill Schuette 52-39 in the governor’s race, while U.S. Senator Debbie Stabenow leads Republican challenger John James 55-35. Both Schuette and James have both sought to align themselves with Trump and Trump voters on the campaign trail. 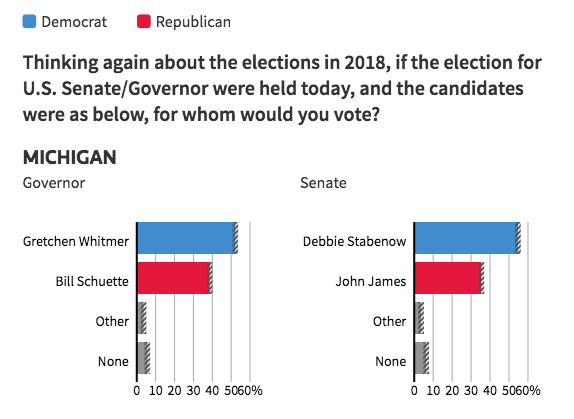 The poll found that Democrats also have edges in races in states like Florida, California, Arizona, and even Texas. The polls were conducted online from Sept. 12 to Sept. 21, surveying more than 1,000 likely voters in each of five states.

The deadline to register to vote in the upcoming Michigan election is Oct. 9; you can register and check your polling location here. Registered voters can participate in the state general election on Tuesday, Nov. 6.