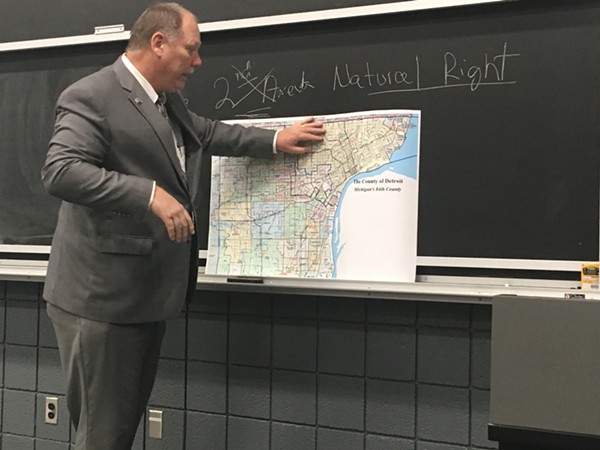 One of the candidates running to be Michigan's next governor has proposed splitting Detroit and Wayne County — a sort of "Detrexit," if you will.

Libertarian Bill Gelineau unveiled his plan while meeting with the Young Americans for Liberty student group at MSU on Wednesday. Dubbed "Detroit 84," the proposal would split Wayne County in two. The new county, Michigan's 84th, would be called "Detroit County," and would be made up of Detroit, Hamtramck, Highland Park, Harper Woods, and the Grosse Pointes. Western municipalities like Dearborn, Redford Township, and River Rouge would have the option to stay in Wayne County or to join Detroit County.

"We think over time this will mean less subsidy from the state," he says. "Right now, Wayne county as a whole is a heavily subsidized entity by the state of Michigan."

Going a step further, Gelineau also calls for redrawing the boundaries of Detroit. Under his proposal, neighborhoods within the city would be able to declare city status.

"If you live in Southwest Detroit, you've got to negotiate with downtown," he says, in reference to a comeback that has mostly only benefitted Detroit's urban core. "Resources have been deprived from most of the neighborhoods for a good long time. And I would like to see Southwest Detroit, however that is formed, become its own city."

He points out that long ago, many of Detroit's neighborhoods — like Warrendale, for example — used to be their own municipalities. "Unfortunately, as Detroit was growing they were allowed by the political powers that be to capture that city and gobble it up," he says. "What's happened is Detroit has become an unwieldy monster."

"Would it be better for people living in Warrendale out on the west side ... to have some independence from downtown, and to be able to make more decisions about their own neighborhood?" he says. "I think that's a good thing."

Splitting Detroit up into smaller units, anchored by schools, would make the city more like its suburban neighbors, "where individual high schools become a point of pride and a point of neighborhood," Gelineau says. Even after a 2016 state bailout, the city's public school district — still the state's largest — is beset by myriad problems, where schools compete for per pupil funding against each other as well as charter schools while neighborhood populations dwindle.

Smaller cities would also be able to set their own income taxes, which Gelineau believes would help them retain population. "One of the reasons so many people have moved out of the city, of all persuasions, is money," he says. "It's really expensive to live in the city."

Lastly, the plan would call for what Gelineau calls a "21st century homestead plan" to allow Detroiters to purchase the tens of thousands of untaxed parcels the city acquired through the Detroit Land Bank Authority. Some Detroiters have described a frustrating process in trying to acquire houses from the land bank.

Gelineau says at this stage that Detroit 84 is more of a big-picture idea. "We're talking about ideas. We're not talking about fully vetted statute," he admits.  He says the idea is based on the Libertarian idea of "'devolution,' where 'big' is kind of an enemy by itself."

For decades, Gelineau says, Detroit has become a big bureaucracy while its population has shrunk to 37 percent of its peak. The state has intervened, taking control of the city and its school district under emergency management. But resources aren't being allocated properly, Gelineau says, and Detroit's suburbs have too much influence on its affairs.

"The idea is that the city of Detroit and the county of Wayne have been at odds with each other for over 50 years," Gelineau says. "The more suburban areas — Livonia, Plymouth, the downriver cities — have exerted a certain amount of control over what Detroit does with itself, and vice versa. We think it's time to try and bring democracy closer to the people."