Protesters injured as truck strikes Fight for $15 rally in Flint 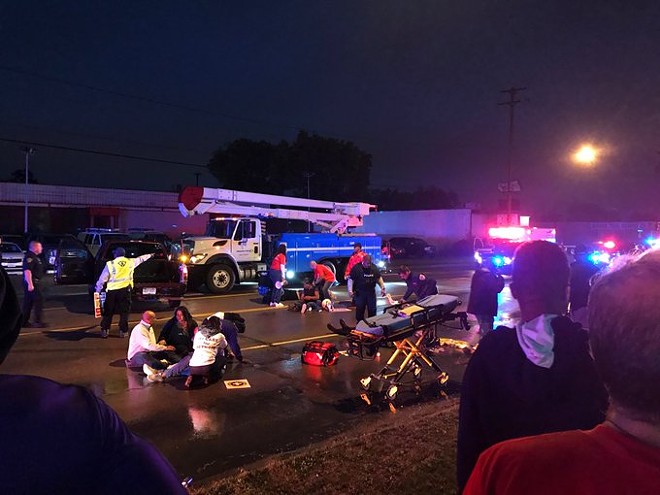 Multiple people at a “Fight for $15” rally in Flint were struck by a vehicle early Tuesday morning.

MLive reports that eight people were rushed to the hospital after a pickup truck hit a crowd that had gathered outside of a McDonald’s near Dort Highway and Lapeer Road. Police say that people were crossing the street when the truck struck them before colliding with a utility vehicle.

Police told WYEI that the incident appears to be an accident and the driver is cooperating with the investigation. Police Chief Tim Johnson said that the driver “seemed pretty shaken up.”

Fight for $15, a national movement that fights for a $15 an hour minimum national wage, is organizing rallies in both Flint and at Warren Park in Wayne State University’s campus in Detroit on Tuesday. The minimum wage in Michigan is currently $9.25.

Around 1,000 fast food workers planned to participate in the strikes to demand union rights, improved workplace conditions, and safety from their employers. press release, Fight for $15 said that after the rallies, strikers would also canvass on behalf of candidates “who will use their power to make it easier for workers to win a union.”

Fight for $15 is also planning rallies in other cities across the country later this week, including Milwaukee and Chicago.

Large companies have increasingly come to raise wages for workers barely making ends meet. In June, Walt Disney Co. raised its minimum wage to $15 for some workers, and Amazon – one of the largest private employers in the country – announced today that it was raising the minimum wage for all U.S. employees to $15.

Democratic gubernatorial Gretchen Whitmer confirmed that she was at the rally in Flint when the accident occurred.

I was in Flint for the rally this morning and am incredibly sad that so many people were hurt. https://t.co/4gtoYMP7NO


The office of Flint Mayor Karen Weaver also released a statement in with the protestors after the crash. “ gathered, with their union, to peacefully protest for a living wage,” the statement reads. “Mayor Weaver’s thoughts and prayers are with them.”